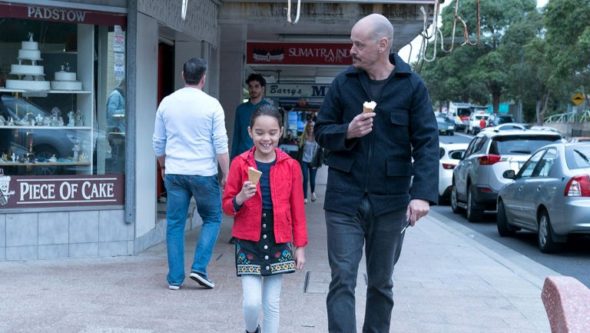 TV show description:
A drama TV show, Mr Inbetween was created by its star, Scott Ryan. It’s based on a cult film that Ryan made more than a decade earlier.

At age 40, Ray Shoesmith (Ryan) is going through a bit of a midlife crisis. He struggles to contain his anger issues and juggle all of the roles that many adult men have in life — a father, ex-husband, boyfriend and best friend. His life is further complicated because Ray also happens to be a hitman-for-hire.

Ray is a caring dad to his 8-year-old daughter, Brittany (Yasumura). She has a good relationship with her father, who she lives within a shared custody situation with her mother Jacinta and step-father Quentin.

Ray is also dedicated to his older brother, Bruce (Cassim), who is experiencing a gradual reduction in mobility and coordination due to a motor neuron disease.

One good thing in Ray’s life is Ally (Satchwell), a female paramedic he feels may be out of his league. But Ally is drawn to Ray, even if she doesn’t know the precise nature of his job.

Gary (Rosniak) is Ray’s best friend of many years. They worked together a great deal in the past, but now, he’s married to Tatiana and is trying to live a more respectable life.

Freddy (Herriman) is Ray’s boss and friend. He runs his business out of a strip joint, and is a guy that people go to if they need a hit put on someone or a debt collected. Nick (Lembke-Hogan) is a young heavy who’s been taken on by Freddy as a hitman-in-training and Ray is delegated to show him the ropes.

What do you think? Do you like the Mr Inbetween TV show? Do you think it should have ended or been renewed for a fourth season on FX?

great show. very sorry I can’t see more of it. won awards then cancelled. perhaps it should have been promoted better

I thoroughly enjoyed it. Good cast and a good story line. I liked it because it’s, well, different. I have always wondered what the motivation is for cancelling a popular series. I’m sure it comes down to viewers and money.

Really liked Mr Inbetween! Would have liked more years/ episodes. Nothing Ends at least let’s you imagine your own outcome or resolution of his last predicament.

One of our favorite shows. Would love to see it back.

Please!!! bring Mr. Inbetween back. I got hooked. Don’t leave me hanging!!!!

Yes renew. We luv it