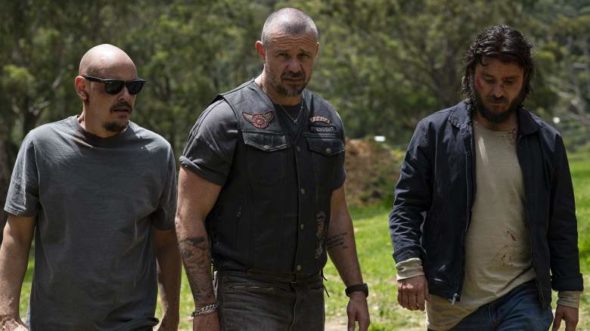 Is Ray where he wants to be in the third season of the Mr Inbetween TV show on FX? As we all know, the Nielsen ratings typically play a big role in determining whether a TV show like Mr Inbetween is cancelled or renewed for season four (in this case, we know season three is the end). Unfortunately, most of us do not live in Nielsen households. Because many viewers feel frustrated when their viewing habits and opinions aren’t considered, we invite you to rate all of the third season episodes of Mr Inbetween here.

A gritty FX drama series (which originates in Australia), Mr Inbetween was created by its star, Scott Ryan. The series also stars Kenny Graham, Chika Yasumura, Justin Rosniak, Matt Nable, Damon Herriman, Jeremy Sims, and Emily Barclay. In the series, Ray Shoesmith (Ryan) has many roles — as a father, an ex-husband, a boyfriend, caretaker to a sick brother, and a best friend. His life is further complicated because Ray also happens to be a criminal-for-hire. In season three, Ray’s world has contracted. Family life looks a little different as he quietly mourns the loss of Bruce, while figuring out how to care for his aging father, Bill (Graham). As Brittany (Yasumura) grows into a young woman, she draws further away from Ray and comes closer to discovering the truth about who he really is. Things seem good with Gary (Rosniak) and Dave (Nable), however, since severing ties with former boss and confidant Freddy (Herriman), Ray is working freelance and feeling a sense of isolation. With business booming, a new connection with criminal kingpin Rafael (Sims) intensifies Ray’s struggle and when sparks fly with new colleague Zoe (Barclay), an unexpected tragedy makes Ray question both his career trajectory and his ethics.

What do you think? Which season three episodes of the Mr Inbetween TV series on FX do you rate as wonderful, terrible, or somewhere between? Do you think that Mr Inbetween should have been renewed for a fourth season? Don’t forget to vote, and share your thoughts, below.

Mr. Inbetween could do with several more seasons. Season three finale looks grim for Ray but he’s a soldier and been there before. Keep it going !!!!

The ending of episode 9 was masterful! I hope they’ll consider a 4th season !

So very disappointed that Mr. Inbetween is not being renewed for a 4th season. It is definitely the most intense show on tv today! I can not believe ratings are so low.
FX, please renew this awsome show, give Ray one more chance!!

Are ya friggin’ kidding me? They cancelled the show without at least concluding season 3? Where were they going? What happened when they got there? How the hell can you cancel this show before the season was even over? Bad form, FX. Bad form.

I LOVE this odd show…why isn’t it getting more seasons? Why isn’t Starz or Netflix picking it up???????

I was devastated to find out that season 3 would be the last of mr inbetween. This is the best show ive seen in a long long time. But i read that scott ryan was kinda having a difficult time playing this role so much. Like rays bad side was rubbing off on him. So if he isnt happy then it has to be. But i swear i hate it

I’ve liked the show ever since S1 E1. Ray is a life very like character, unlike the 1-dimensional characters you see on US Network nonsense. Enough of the canned laugh tracks already!