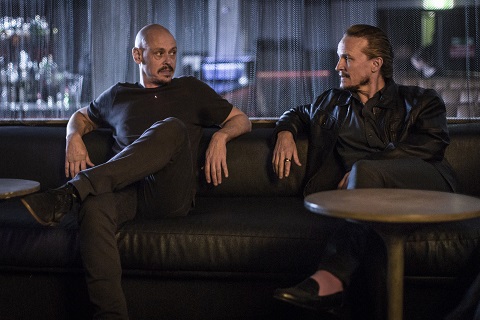 FX has something new from down under. This week, the network announced they’ve ordered a new TV show called Mr. Inbetween.

From Scott Ryan and Nash Edgerton, the half-hour drama stars Ryan as “Ray Shoesmith, a father, ex-husband, boyfriend and best friend: tough roles to juggle in the modern age. Even harder when you’re a criminal for hire.”

FX has ordered six episodes of Mr. Inbetween, which is slated to premiere this fall.

LOS ANGELES, May 11, 2018 – FX has placed a series order for Mr Inbetween, a half-hour drama series created by and starring Scott Ryan and directed by Nash Edgerton, it was announced today by Eric Schrier and Nick Grad, Presidents of Original Programming for FX Networks and FX Productions.

The FX Original Series was shot in Australia and is produced by Blue-Tongue Films and Jungle Entertainment, in association with FX Productions, Screen Australia and Create NSW. Michele Bennett is Producer and Ryan, Edgerton and Jason Burrows are Executive Producers. The six-episode season, written by Ryan and directed by Nash Edgerton (Gringo, The Square), will air on FX and Foxtel this fall. FX and Foxtel have commissioned a writers room for a second season.

In Mr Inbetween, Ryan plays Ray Shoesmith, a father, ex-husband, boyfriend and best friend: tough roles to juggle in the modern age. Even harder when you’re a criminal for hire.

“Mr Inbetween is an extraordinary achievement for Scott Ryan, who took it from an indie film with a cult following to a half-hour drama that he stars in,” Schrier said. “Scott is one of those rare creators who can bring his own character to life on screen, and he is perfectly paired with Nash Edgerton, who brilliantly directed all six episodes. This project is a great inaugural step with Foxtel as the home of FX Original Series in Australia.”

Edgerton said, “I couldn’t be happier to be sharing Scott Ryan’s character Ray with as many people as possible, and Scott and I couldn’t be more excited to have Mr Inbetween on FX and Foxtel.”

Nash Edgerton is a true multi-hyphenate. After getting his break at 18 years old as a stunt performer, he has gone on to establish himself as an actor, stunt performer, producer, writer and director of indisputable talent. With well over 200 film and television credits on productions including The Matrix Trilogy, Star Wars II and Star Wars III, The Thin Red Line, The Great Gatsby, The Gift and Zero Dark Thirty, Edgerton has continued to challenge himself with a variety of eclectic projects both in front of and behind the camera.

The Square, Edgerton’s first feature film as director, received 7 Australian Film Institute award nominations, including Best Film, Best Director and Best Original Screenplay, and was one of 12 international films selected for Official Competition for the inaugural Sydney Film Prize at the 2008 Sydney Film Festival. The Square was released in Australia and internationally to wide acclaim from highly regarded critics including A.O. Scott (NY Times) and Roger Ebert (Chicago Sun-Times).

Scott Ryan wrote, directed and starred in the The Magician, a mockumentary that introduced audiences to the very funny and very dark world of hitman Ray Shoesmith. Originally shot over ten days at a cost of AUD $3,000, after a screening of a thirty minute cut down version at the 2004 St Kilda Film Festival, Ryan met filmmaker Nash Edgerton who took on the project on as editor and producer. Receiving further funding, the film was then released by Hopscotch Films in 2005 and went on to be nominated for a Film Critics Circle of Australia Award and an Inside Film (IF) Award in 2005. He is currently developing a project that delves into the John F. Kennedy assassination.”

What do you think? Are you a fan of crime dramas? Will you watch Mr. Inbetween?