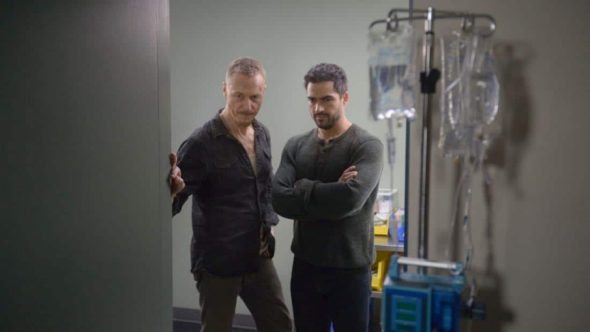 FOX seems to be trying to purify itself, today. In addition to cancelling Lucifer after three seasons, the network has also cancelled The Exorcist TV show after a two-season run. It seems they can’t give the Devil his due and pay Tim Allen, too.

Lucifer: A Look at the Ratings:

Ratings have always been low for The Exorcist and it looks like season two was the final nail in the coffin for FOX. Overall, the season averaged a 0.41 rating in the 18-49 demo and 1.322 million viewers, and was down by more than 30% in both measures, in comparison to the first season.

The Hollywood Reporter has confirmed The Exorcist cancellation, as has show creator Jeremy Slater. Check it out.

What do you think? Did you watch The Exorcist TV series? If it were up to you, would FOX have cancelled or renewed this TV show for season three?

Jessica Pena contributed to this report.

Who is using the company brain cell at the moment?

I am so upset there’s no season 3! How can you just leave us hanging like that. Such a HUGE disappointment
Hopefully they change their minds.

I so agree,”With leaving us hanging like that.” So wrong. I’m just as disappointed. Been waiting and waiting for the 3rd season. I loved 1 + 2 seasons.

I’m so disappointed……. I love this show

The Exorcist is a GREAT show! There’s nothing on any other network or cable even remotely like it! Even though all of the actors, for the most part, are unknown, The Exorcist made us like them as well as care for the m almost b immediately. Good job on that! I will admit that season one totally slayed season 2, but season 2 was still great. I think somebody had the idea that the more plot twists and turns, the better. Not so. I’ll give one example of that, below. If it doesn’t cancel (fingers crossed) go with the writers… Read more »