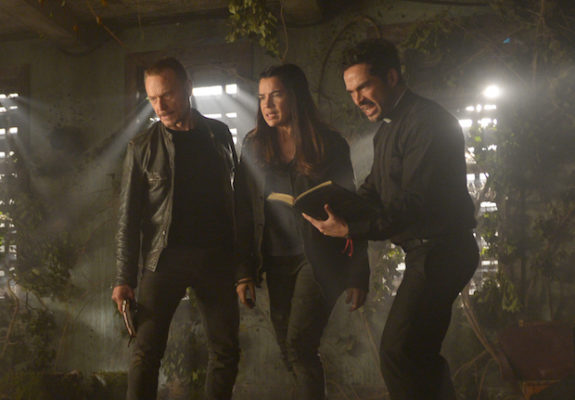 As if a network possessed, FOX renewed The Exorcist TV show, despite hellishly low broadcast ratings in its freshman outing. While the Rance family’s story has concluded — meaning Geena Davis, Alan Ruck, Hannah Kasulka, and Brianne Howey are not returning as series regulars — the horror continues for Father Tomas Ortega (Alfonso Herrera) and former priest Marcus Keane (Ben Daniels). Should fans expect further divine intervention? Will The Exorcist be cancelled or renewed for season three? Stay tuned. *Status update below.

Based on the 1973 feature film and William Peter Blatty’s 1971 novel, The Exorcist stars Herrera, Daniels, Kurt Egyiawan, Zuleikha Robinson, John Cho, Brianna Hildebrand, and Li Jun Li. Christopher Cousins and Cyrus Arnold join the FOX horror drama this year, on a recurring basis. In the second season, Father Bennett (Egyiawan) sets out to uncover evil at the Vatican, while Keane and Ortega set off to assist troubled foster children, in the Pacific Northwest.

12/16 update: You can see the rest of the latest night’s ratings.

For comparisons: The first season of The Exorcist on FOX averaged a 0.68 rating in the 18-49 year old viewer demographic and 1.914 million total viewers (live + same day).

What do you think? Do you like The Exorcist TV series? Should it be cancelled or renewed for a third season on FOX?

Please renew. Great series, great performances. One of the most compelling series on tv today, Deserves a third season

Great series one of the best. Deserves to be renewed for a third season

Please tell me there will be a Season 3. This show is so awesome! I love the genre and all about it. Come on Fox do the right thing for once…

Season 3 please I been waiting

Must be one of the best TV-series I have ever seen.
Must be renewed for a new third season, cannot wait !

I love the main characters, it has potential to be a long runner.

Finally a show for the horror fans! I and many others I know hope to see this series back on!!! I’m hoping FOX keeps it on. There isn’t a show compared to this one on any other channels!

This is a very good show, i’ve watched the whole S01 during a night because i simply can’t stop & do another thing instead – my editor is so done with me 😀 – but i really need to have S03, the storyline is perfect and smooth & cast are doing their bests,everything is perfect & if some homophobic ***** are arguing because of the Marcus/Peter kiss scene then ignore them all,cuz if it was the point of canceling a whole show,then 90% of the shows shall be canceled which are not…really looking forward for S03! p.s. if it renewed… Read more »

I Love this series. I think it’s plot makes it excel even over the Original Movie. I agree with some of the posts regarding the 18-49 viewer rating scheme. My Wife and I are in our sixties and some of our friends that we recommended this to Love the Series also. Looking forward for a Season 3.

I love this show. It’s different and not the same boring crime show or comedy that isn’t funny. Please keep The Exorcist around.

To be honest i just want to say this is the best tv show series I have ever watched! As well as watching other shows like the walking dead, fear the walking dead, power, z nation… The exorcist is my FAVOURITE 🙂 like I’ve never missed an episode as soon as it’s out in there ready for it. I can re call all of it from the moment it started. I really think they should carry on making The Exorcist because it’s only the second season and I’m sure once more action starts kicking in the more views and hits… Read more »

I love this show just had my neighbor start watching it she also loves it!! Please please renew for season 3