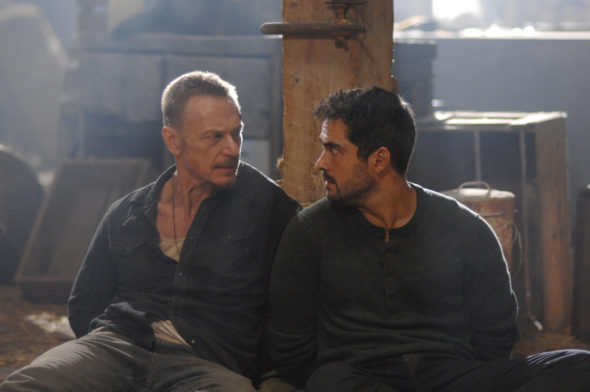 Will there be a third season of The Exorcist? Recently, executive producers Jeremy Slater and Sean Crouch spoke with Deadline about the future of the FOX TV show.

In the interview, Slater revealed there are plans for a third season of The Exorcist but FOX probably won’t make a renewal decision until this spring:

We have ideas for sure. I mean, we obviously have a great mystery built in with Tomas and Mouse having driven off into the sunset together and then six months later Marcus learns that either they’re in danger or something bad has happened.

In this season, we’ve also set up the idea that at this point the Catholic Church has been compromised. It has been infiltrated by these sleeper agents including Father Bennett, who has now been turned to the other side, to give us a great face to the evil conspiracy. So we’re really stacking the deck against our heroes and we’re really saying that if they’re going to stand a chance at kind of toppling this conspiracy, we’re going to need to form some sort of resistance. Whether that means reaching out to members of other faiths and other religions or whether that means Marcus reaching out to sort of his contacts in the supernatural underworld, I think you’re going to start to see the first steps in a larger war.”

Also, Crouch said that if FOX doesn’t renew the series it’s likely The Exorcist could wind up at Hulu or Amazon:

Well, because of the ownership, if it does get canceled or let go by Fox in May, that does open up for us to be able to go out to Hulu or Amazon or you know somewhere else with it. I know 20th the studio loves it and it does really well internationally and it does well online. So it could be one of those things that they wait and all of a sudden next December or next January we announce that there’s a deal with Hulu at that point for the next version of what this is.”

However, Slater did tweet about the FOX/Disney merger, saying it wasn’t great news for The Exorcist:

This Fox/Disney merger is awful for a number of reasons, and I can’t imagine it means good things for the future of our show. But hey, Disney: You now own about 18 unused drafts of FANTASTIC FOUR. Go nuts.

What do you think? Are you a fan of The Exorcist? Do you want a third season?

I really enjoyed this show. It seems any show I enjoy gets cancelled! Oh well….great stories, great acting et al. Wish the powers that be would reconsider.

Love this show & have since day one. I can see where they can open this up to a lot of things especially in today’s world! I hope Fox picks it up and continues the story. If they don’t then thank God there is Amazon or Hulu, other open minded places we can catch some really good, well written shows!!

I love this show!!!! please don’t cancel it. there is a great underlying message about the insidiousness of evil. I’m not religious but I can see the paralells in this show to the state of our world.

well with the merger i dont see disney jumping on it BUT i LOVE the show……its edgy , different , gorey & the perfect thrill ride to add to my list of shows i watch 🙂 BUT i do love the idea of it maybe going over to hulu or amazon……….so if fox makes a bad move then it WILL be someone elses gain :):) keep this show going 🙂

I love this show I’m hoping it doesn’t get cancelled.

Please renew it. I’m hanging here wonderein what happens next,