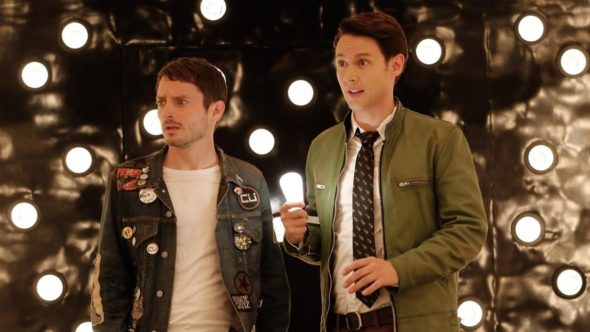 The cancellation of Dirk Gently’s Holistic Detective Agency is not that surprising given the show’s low ratings. Season two, which just wrapped, averaged a .07 rating in the 18-49 demo and only 248,000 viewers.

We are beyond proud of this brilliant original series and so appreciative of the outstanding team behind it including Max Landis, Samuel Barnett, Elijah Wood, and many many others. It was a privilege to work with this talented and passionate group of writers, producers and actors on these two seasons of Dirk. Thanks also to the passionate fans who embraced this fantastically novel world.”

What do you think? Are you a fan of Dirk Gently’s Holistic Detective Agency? Are you disappointed it’s been cancelled?

Finally got to watch both seasons of this smart, creative, wonderful show. Some things are just to smart to survive-even on the BBC. So sad and disappointed. I will be seeking out the books.

Just discovered that Dirk Gently was cancelled. I’m bereft. Loved this quirky, surprising show. I think Netflix should take it on and create more seasons.

I am in love with this show! Get Netflix to pick it up. With more exposure it could be a cult classic

This show is absolutely spectacular! What I wouldn’t give for another few seasons. It’s so multi-layered and complex; with most does I can predict fairly easily what will happen next. This is one of the very few shows that I’ve ever seen that I have absolutely no idea and it’s DELIGHTFUL. Please bring it back! For those of us that don’t watch live TV but watch it streaming later, it’s an absolute gold mine. We’ve been binging one episode after another, completely enamored with it.

Amazing serie! I would have loved to see a season three, and beyond, of it. Such a shame that so often only mainstream and reality soap shows get to continue for ever.

This was a terrific show, original , funny, very clever and fast paced. I am amazed it has been cancelled. Seems like the best shows get cancelled. I wish all the best to the wonderful actors on this show!

All the best show are being cancelled, 🙁 It is such a shame, because this kind of series serve a group of people that are extra fond of these kind of movies… I already had to see shows like Carnivale, The ***** from apt 23, Girlboss and many others that i\I was especially fond of disappear. And then also New girl, which is only watchable at Hulu which we dont have in EU. And shows like Flaked and Master of none probably wont continue because they are more or less finished… Its the same with food: many things that I… Read more »

I am really disappointed to see this series canceled. I was so fun and challenging to watch. The actors were great. I am just unhappy.

Seriously disappointed. My family just found this series and now I find out it’s been cancelled. It is a truly unique quirky series.

As usual, something of extremely high originality, quality, acting, etc gets canceled while the endless stream of utter garbage continues relentlessly… :/

I´m heartbroken. This was one of my favorite shows I´ve ever watched. So unique, hilarious, beautiful filming, amazing actors and acting. I loved everything about it and I am sure alot of people with me so I´m sad to have to say goodbye. It´s been one of many great shows cancelled due to bad advertising, while ****** shows that don´t deserve it keep getting renewed for more seasons. Hope something will change about that, and in the mean time I´ll keep my fingers crossed for another chance for DGHDA.

I watched dirk gently on netflix after my cousin recommended it .. I enjoyed it so much ..i watched it back to back , and when season 2 ended i was ready to dive into season 3… but was shocked to see there was no season 3 ….thats when i searched to find out how soon i’ll be able to continue and i was gutted …. its sad , I really hope they change their minds and make the third season anyway !!!! Fingers crossed