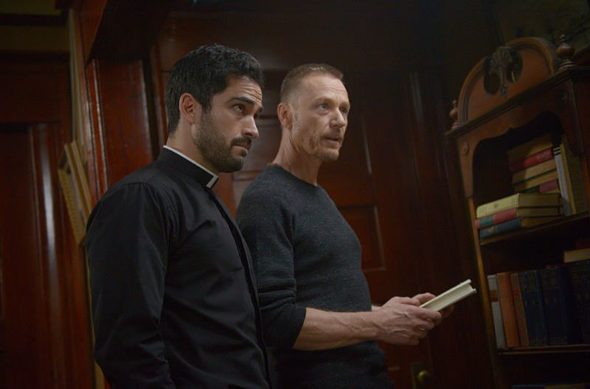 The second season of The Exorcist wraps tonight, December 15th, at 9 p.m. ET/PT. Are you a fan? Do you think FOX should renew the series for a third season?

Based on the ratings, a third season of The Exorcist would be surprising. The series landed a surprise second season renewal last May because the first season’s ratings had been dismal. Season two has done much worse. So far, season two is averaging a 0.42 rating in the 18-49 demo and only 1.33 million viewers, making it one of FOX’s lowest-rated TV shows for the 2017-2018 season.

But ratings don’t always determine a show’s future. Like last year, FOX could give The Exorcist another chance.

What do you think? Would you watch a third season or, should this FOX series be cancelled and put to rest?

I love this show, story lines and cast! I sure hope that not only will there be a season 3, but that there’ll be many more seasons to come!

Please bring this show back!! It is soooo good

I truly hope they renew this show. Season one was good, however, I really feel that season two was the better of the two seasons. The only advantage to being canceled and moving to cable, would be that they would have a little more grace from the sensors. It could really use a little “roughing up” around the edges. Maybe a little harsh language and a little more gore. I mean, we are dealing with demons….right?

just renew…..the show is the best horror show they got and its followers increasing all the time!and it keeps getting better to boot!!

I sure hope the Series continues. I enjoy watching the Exorcist, this is a very good show. The story plots are excellent as well as the Series.
I would very disappointed if the Exorcist is cancelled. I want to see in the up coming months, that you will be adverting next season show time.
Please, Please, reconsider your decision, the public are request for the Exorcist to continue. This is an excellent program.

This is one of my favorite shows, please please renew!

Phenomenal show! I’ve never missed an episode, and will never miss it, I do have to record it sometimes, due to my wife! Its a great show, and with how FOX looks so desperate to get a great show, I imagine they wouldn’t be capable of recognizing a hit if it bit them in the butt!

Please renew The Exorcist!! Cant wait for the third season.

I would like to see another season in another setting. So far we’ve seen a city setting and a rural setting, perhaps a campus type setting or even a military type compound. I love different themed shows on TV and this one is a high quality offering that takes us away from the cop show, the court show, the medical show, etc. and so on. Keep it on it isn’t doing that badly.

It’s the only scary show on TV (I gave up on Walking Dead years ago.) Smart and creepy with great performances. And this season ended on a cliffhanger, so they’ve got to keep going now. I have to know what happens!

The Exorcist is a brilliant show and it would be unwise to cancel it now when the show can only get better and gain more viewership. I say renew it because those that have watched the show can inform others about how good the show is, so please renew it.