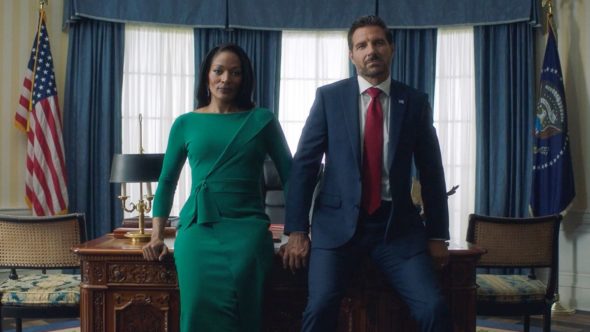 Fans of Tyler Perry’s The Oval do not have long to wait for the return of the drama series. Season three will arrive on October 12th and the cable channel has released a teaser that hints at what follows the cliffhanger of this week’s second season finale.

Who will make it back alive? 😳

Get ready because #TheOvalOnBET is returning October 12th for season 3! 🙌🏾 pic.twitter.com/X4GR3wa3yL

What do you think? Are you excited about the return of Tyler Perry’s The Oval to BET next month?

It’s so embarrassing to watch but I can’t wait to see certain characters killed, especially the president, Kyle & Donald and maybe Barry & his moma! The dialog is slow, unrealistic & redundant, (I can’t even find all of the right words!) And what is the name of the character playing Victoria’s father? I can’t find his information anywhere! And Priscilla should get an Oscar, Grammy & a standing ovation or something for her speech to the first lady in episode 22!!! TRUTH That was the beginning of the end for me and I can’t wait to see those sorry… Read more »