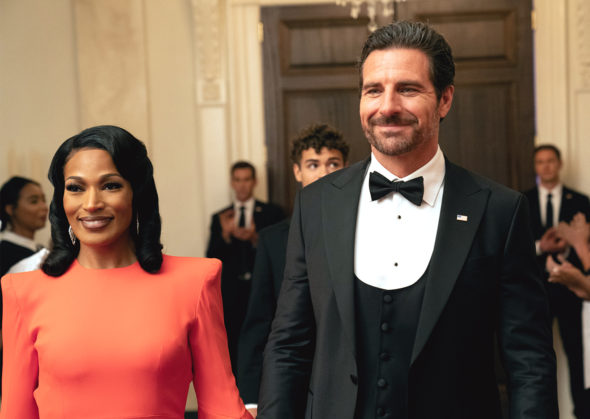 There will be plenty of more drama in Washinton DC. BET has renewed The Oval TV show for a fourth season. The third season finishes airing tonight.

A primetime soap opera series, Tyler Perry’s The Oval stars Ed Quinn, Kron Moore, Javon Johnson, Ptosha Storey, Vaughn Hebron, Teesha Renee, Daniel Croix Henderson, Lodric D. Collins, Ciera Payton, Walter Fauntleroy, Taja V. Simpson, Brad Benedict, Travis Cure, Matthew Law, Bill Barrett, Derek A. Dixon, Nick Barrotta, Kaye Singleton, and Russell Thomas. The TV show begins as a new First Family moves into the White House. The series lifts the veil of what can happen when the leader of the free world, his wife, and family are crazed maniacs. The series also highlights the personal side and everyday lives of the staff who run the inner workings of the nation’s most iconic residence. Season three begins as the President and First Lady barely dodge death but continue in their ways. Hunter vows for revenge, Victoria has lustful eyes on Sam, and Jason is ready to finish the job someone else started: taking his mother out..

Airing on Tuesday nights, the third season of Tyler Perry’s The Oval averages a 0.19 rating in the 18-49 demographic and 937,000 viewers in the live+same day ratings (includes all DVR playback through 3:00 AM). Compared to season two, that’s down by 6% in the demo and up by 10% in viewership.

What do you think? Have you kept up with The Oval TV show on BET? Are you glad that this show has been renewed for a fourth season?

I can’t wait for season 4 of the Oval when is it coming on?

I can’t wait for season 4 of the oval.I have been a fan since the beginning of the series

I am definitely looking forward to the new episodes of sistas and the oval. I love both of the shows. Be so glad when the new seasons begin. But July is a long time away. Lol.

Agree,Hope I do not forget when it is coming on,waiting so long.

Keep up the great work sending love from Houston Texas

We need a season 6 of the oval

I had really gotten deep into the Oval, and then it ended with so many unanswered questions, so, yes, I am anxiously waiting for the 4th season, there are endings that need to happen…

More and more of the oval and ruthless they are good I be looking forward to seeing them I’m salty now because I can’t see any more oval until season 4 come out .

It seems that I agree with everyone elses comments. When is Ruthless coming back on?

So what are we supposed to do while we wait for their return,I have watched Ruthless over & over,going to put it on hold for awhile maybe go back to the Oval.

Personally, I would love one more season of The Oval. However, I wouldn’t want to see another.

One of my favorite shows. I’m so happy to hear that the show will continue.

Love to see The Oval is coming back !!! Keep the craziness going !!!

I even got my husband to watch, neither of us can guess what comes next. With all the craziness. We both love the show, bring more on !!!

I am very happy for the Oval”s return. I just don’t know how much more Craziness we can handle. It is the craziest night of the week.