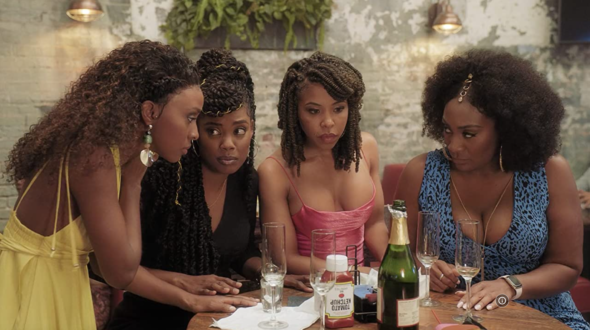 These ladies will be together through thick and thin — and season four. BET has renewed the Tyler Perry’s Sistas series for another year. Season three is currently airing on Wednesday nights.

The third season of Tyler Perry’s Sistas averages a 0.24 rating in the 18-49 demographic and 941,000 viewers in the live+same day ratings (includes all DVR playback through 3:00 AM). Compared to season two, that’s even in the demo and down by 0% in viewership. While these numbers don’t include further delayed or streaming viewing, they are a very good indicator of how a show is performing, especially when compared to others on the same channel.

In addition to the renewal, the cable channel has also set an airdate for the second edition of The Tyler Perry Show: The Sistas After-Show Edition. It will air on Wednesday, December 22nd, on BET and BET Her. It seems likely that it will follow the third season’s finale.

Check out our status sheets to track new TV series pickups, renewals, and cancellations. You can find lists of cancelled shows here.
What do you think? Have you enjoyed watching Tyler Perry’s Sistas on BET? Are you glad that the series has been renewed for season four?

This show is awesome

I Love the show I enjoy ever min of it