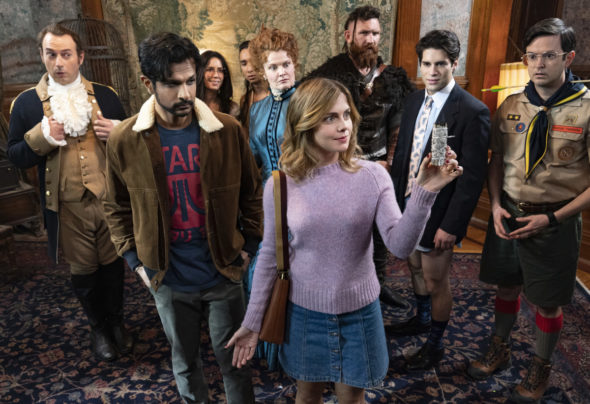 The spirits are staying on Earth, at least until spring. CBS has given the Ghosts sitcom a full-season. It’s unclear however how many additional episodes have been ordered. Two other new CBS shows, FBI: International and NCIS: Hawai’i, were previously given full seasons.

The first season of Ghosts averages a 0.58 rating in the 18-49 demographic and 5.44 million viewers in the live+same day ratings (including DVR playback through 3:00 AM). While these numbers don’t include further delayed or streaming viewing, they are a very good indicator of how a show is performing, especially when compared to others on the same channel.

The network touts that Ghosts is the top-rated new network comedy this season with its two-episode debut attracting 7.76 million viewers in live+7 day viewing. It’s worth noting that only one other new comedy — The Wonder Years reboot — has launched so far this season. The ABC show’s single premiere episode has registered 4.36 million in live+7.

“We’re thrilled this spirited new comedy has struck a chord with viewers and critics alike and is off to a great start,” said Thom Sherman, Sr. Executive Vice President, Programming, CBS Entertainment. “We’ve loved Ghosts since day one, and thank the outstanding executive producers, cast and writers for skillfully bringing to life the boldest, most unique comedy you’ll find anywhere on television this season.”

What do you think? Have you tuned in for the Ghosts TV series on CBS? Are you glad to hear that there will be more episodes? Are you hoping for a season two renewal?

Being English, I was worried that the show would be corrupted by conversion to the American standard of overproduction to provide the immediacy that US viewers seem to crave but no, not this time. I’m very pleased to say the pace is similar to the UK version, the characters are the same but different in equal amounts and the story lines are brilliant. For those detractors who knock the slower pace of the show than that which they are used to, I say have patience, give it a fair go. For me, well, Im finding that the US version has… Read more »

Have enjoyed watching Ghosts this season. Good laughs and funny situations from the whole cast. Hope the show returns for many more seasons.

Love watching Ghosts. Every episode has provided great laughs. The characters are so full of life – LOL. I hope the show is continued for several more seasons.