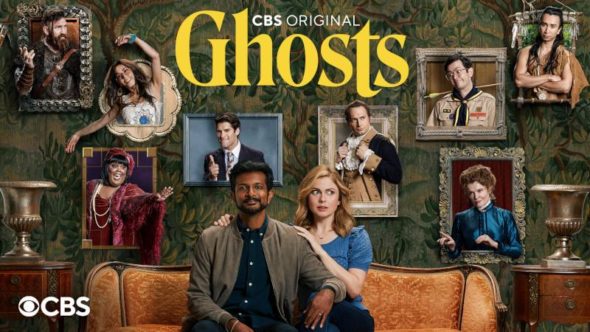 CBS has just six timeslots designated for half-hour comedies and most of the slots are filled with established shows. It can be tough for any new show to gain traction these days and sitcoms are no exception. Will Ghosts be cancelled or renewed for season two? Stay tuned.  *Status Update Below.

4/22 update: You can see the latest night’s ratings in context.

What do you think? Do you like the Ghosts TV series on CBS? Should it be cancelled or renewed for a second season?

I like the premise of this show, and some of the characters. But I do not like the actor who plays the hotel owner. I think he’s ugly to look at. I don’t think a middle eastern look is right for this plot.

This is the worst show on tv! Does not compare wit B-positive in any way. Some of best on bubble and this ridiculous show already renewed. I cut tv off when it is on. I don’t get it!!!

This is a great show with a lot of humor and moral lessons.

Season 2? Ghost is interesting and is one of the only
Few shows that I watch!

It would be sad to lose this show. It was slammed on IMDb for its pilot episode, but this is the only show on network TV that makes be burst out laughing several times an episode. The one-liners are just so fast and funny!! Rose McIver and Utkarsh Ambudkar are great, and with the rotating emphasis on different characters, the jokes don’t grow stale. I really hope this show stays on for another season or more.

Funniest show in I can’t remember when. Steadily laughing the entire episode. Cancelling this show would be such a huge mistake!