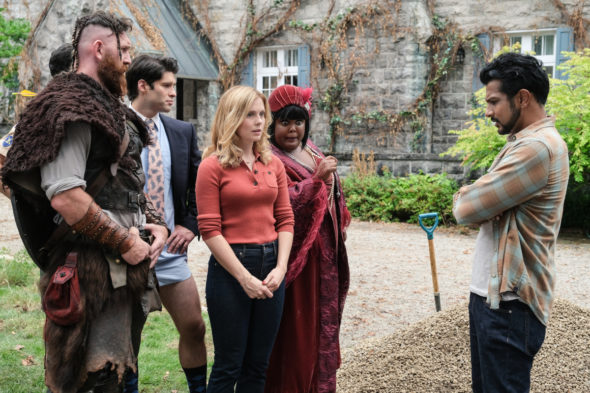 Can Samantha and Jay get a moment’s peace in the first season of the Ghosts TV show on CBS? As we all know, the Nielsen ratings typically play a big role in determining whether a TV show like Ghosts is cancelled or renewed for season two. Unfortunately, most of us do not live in Nielsen households. Because many viewers feel frustrated when their viewing habits and opinions aren’t considered, we invite you to rate all of the first season episodes of Ghosts here.  *Status Update Below.

A CBS single-camera supernatural comedy series, the Ghosts TV show stars Rose McIver, Utkarsh Ambudkar, Brandon Scott Jones, Richie Moriarty, Asher Grodman, Rebecca Wisocky, Sheila Carrasco, Danielle Pinnock, Roman Zaragoza, and Devan Chandler Long. Freelance journalist Samantha (McIver) and Jay (Ambudkar), an up-and-coming chef, are a couple from the city. They throw caution (and their money) to the wind when they decide to convert a huge rundown country estate they inherited into a bed & breakfast. They discover the hitch is that it’s inhabited by many spirits of deceased residents. The departed souls are a close-knit, eclectic group but, if they were anxious about the commotion that a renovation and a B&B would create in their home, it’s nothing compared to what happens when they realize that Samantha is the first live person who can see and hear them.

What do you think? Which season one episodes of the Ghosts TV series do you rate as wonderful, terrible, or somewhere between? Do you think that Ghosts should be cancelled or renewed for a second season on CBS? Don’t forget to vote, and share your thoughts, below.

Love Ghost!! My favorite show !!! Thursday night line up is the best on tv ! Can’t wait for Thursday with Sheldon & United States of Al & Ghost !!

One of the most unique and entertaining shows ever!! Please keep it going…LOVE GHOSTS!!