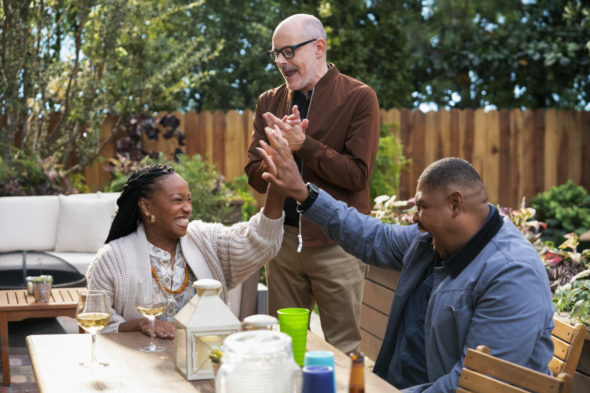 Will Wade get closer to finding love again in the second season of The Unicorn TV show on CBS? As we all know, the Nielsen ratings typically play a big role in determining whether a TV show like The Unicorn is cancelled or renewed for season three. Unfortunately, most of us do not live in Nielsen households. Because many viewers feel frustration when their viewing habits and opinions aren’t considered, we invite you to rate all of the second season episodes of The Unicorn here.  *Status Update Below.

A CBS single-camera comedy series, The Unicorn stars Walton Goggins, Rob Corddry, Michaela Watkins, Omar Miller, Maya Lynne Robinson, Ruby Jay, Makenzie Moss, and Devin Bright. Following the loss of his wife, Wade (Goggins) is now the single parent to their adolescent daughters, Grace (Jay) and Natalie (Moss). With the encouragement of his kids and close friends like Forrest (Corddry), Delia (Watkins), Ben (Miller), and Michelle (Robinson), Wade decides to try dating again. To his amazement, Wade is told that he’s considered a hot commodity in the dating world and the perfect single guy, aka a “unicorn”. He’s employed, attractive, and has a proven track record of commitment. Thanks to the support of his little girls and his friends, Wade is hoping to find happiness again and puts himself and his healing heart out into the world.

What do you think? Which season two episodes of The Unicorn TV series do you rate as wonderful, terrible, or somewhere between? Do you think that The Unicorn should be cancelled or renewed for a third season on CBS? Don’t forget to vote, and share your thoughts, below.

Yeah, nah. Season one started with a good premise and was a decent watch. Season 2 jumped the shark pretty quickly with most of the supporting cast acting like annoying 3-year-olds. The basic plot is not moving forwards with the main character finding a new relationship with Natalie Zea but that seems to have ended with a silly contrived plot twist. Maybe Natalie saw the writing o the wall? Anyway, no season 3 please.