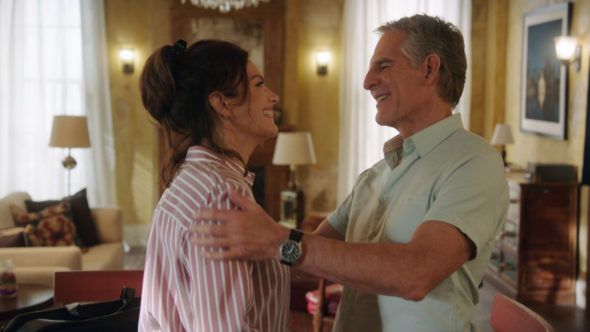 CBS made some difficult decisions when it came to cancellations this season. MacGyver, All Rise, The Unicorn, and NCIS: New Orleans have ended or will end this month, and Kelly Kahl, the president of CBS Entertainment, spoke about what went into the decisions to cancel all four shows, per Deadline.

MacGyver and NCIS: New Orleans (which airs its finale this weekend) have both aired on CBS for several seasons, and fans were surprised when the news broke about their cancellations. Kahl said the following:

“Every year you evaluate what is making the strongest statement for your schedule and what gives you the best circulation, what will bring you the most numbers of viewers. You ask that question for pretty much every show every year, how can we make the schedule as strong as we can in the fall, and that leads to some tough decisions. MacGyver has been an excellent show for us, New Orleans was an excellent show for us. But sometime shows hit the end of their cycle and we have to, in some cases, say goodbye.”

As for All Rise and The Unicorn, both aired for two seasons on the network. Kahl said the following about their cancellations:

“We creatively love both shows, it’s literally a numbers game on the schedule, and it’s a number game when it typically comes to getting a renewal. I think these shows were not living up to the potential in terms of an audience that we hoped to see in their respective time slots.”

What do you think? Did you want to watch more of these four TV shows on CBS? Which cancellation surprised you or upset you the most?

CBS there’s other networks!!Thanks for making me look. Ill boycott you like I have NFL. You should look at your ceo and fire him and all of his yes men!!

I enjoyed NCIS New Orleans and will continue to watch the reruns but, All Rise and McGuyver are my favorites of the 3. Hope they will make the comeback while looking for series to fill time slots in future seasons. They make watching television interesting. Not everyone can afford Streaming.

Very disappointed to see all rise cancelled. A series that made you think.

Really sad to see MacIver & NCIS New Orleans go!! In both cases the shows were left hanging & ready for more episodes!! I really hope another Network of Netflix pick them up & keep pumping out great shows!!

NCIS: New Orleans shouldn’t have been canceled as it was a favorite of everyone I know and talked to. Whoever decides to cancel great shows needs another job!! Bring it back!!!

“All Rise” is perhaps one of the smartest and most enjoyable new TV dramas in years—stressing justice and—for once—not all about violence! The actors are perfect in their roles and sympathetic characters, and each court story has illuminated an interesting angle of society and the law. It is truly disappointing that CBS has canceled the show; I hope the network will reconsider.

I am so sad that All Rise has been cancelled. It was a quality show with several great story lines and was definitely a bright spot among the garbage that typically airs on network television. Judge Lola ROCKED, and I cannot imagine this decision is encouraging to CBS viewers.

I hate that you cancelled MacGyver and All Rise. Couldn’t you have tried them in different time slots? They’re great shows!

I am very disappointed with CBS for canceling NCIS New Orleans and All Rise. These are two very well written and interesting shows. With reality shows taking over t.v. I appreciated the fact that I could watch something powerful (All Rise) and exciting and fun NCIS NOLA. I have enjoyed all 7 seasons and 2 seasons of these shows. I will miss them both.

I am very disappointed to hear that NCIS New Orleans and All Rise are being cancelled. I wish network television would listen to its viewers instead of watching its ratings. Please keep some GOOD shows for me to watch. It seems like every time I find a show I like to watch it gets cancelled.

Disappointing that a quality show, like All Rise was cancelled. I will miss NCIS New Orleans as well. Apparently cheap to produce crap reigns supreme. Nothing new this year stands out. So sad. No wonder people turn to non-tradional vs broadcast television.

The cancellation of All Rise was a huge disappointment. I believe the show added a positive experience to a very negative world.

I agree @RSD!!! When I heard “Series Finale”‘I thought, ” to be sure I heard that wrong & it’s the “season finale.” So, I rewound it & played it again & sure enough, it was series. It seems like every time these major networks actually get shows that are socially relevant to what’s going on in our culture right now, they cancel it. I looked forward to watching every single episode & started watching from the very 1st episode. I just don’t understand it @ all. VERY DISAPPOINTED!!!

I am very disappointed that CBS is canceling All Rise! It’s a great show. They should really reconsider their choices.

They do that, there better do a bunch of other series of bringing them back. Because if it all rise gets brought back good grief ; bring back at least 10 other ones that were canceled they were hell of a lot better.