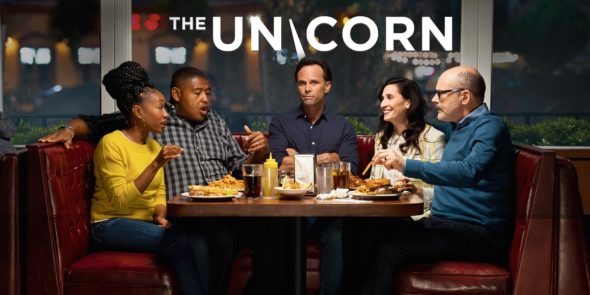 TV show description:
A year ago, Wade (Goggins) lost his wife and he is now a single parent to their adolescent daughters, Grace (Jay) and Natalie (Moss). With the encouragement of his kids and close friends like Forrest (Corddry), Delia (Watkins), Ben (Miller), and Michelle (Robinson), Wade decides to try dating again.

To his amazement, Wade is told that he’s considered a hot commodity in the dating world and the perfect single guy, aka a “unicorn”. He’s employed, attractive, and has a proven track record of commitment. Thanks to the support of his little girls and his friends, Wade is hoping to find happiness again and puts himself and his healing heart out into the world.

Series Finale:
Episode #31 — Put On Your Mask First
Wade comes to terms with putting his relationship with Shannon in the past and starts dating again. Also, Delia realizes why she has been so controlling her whole life, and Michelle takes on the role of managing Ben’s business finances.
First aired: March 18, 2021.

What do you think? Do you like The Unicorn TV show on CBS? Do you think it should have been cancelled or renewed for a  third season?

I really enjoyed the show. I was upset that they got canceled. It was very funny. Just about all my shows got canceled last season. I don’t watch cbs as much as i used to.

It is sad that it was canceled. It was one of the more imaginative and funny shows on..

Well CBS does it again . I Used to watch so many good comedy’s on CBS
WHO AND HOW are they getting their ratings to keep cancelling these shows? This show was so funny really loved the dynamics. a great bunch of actors. Again this is why viewers are streaming and leaving major network for watching tv behind: who wants to get invested in show that is here today gone tommorow especially with CBS . Just another disappointment for this network to cancel a decent show.

Please renew clean, comedy for all

I love the show. I didn’t get the point of Michelle calling her neighborhood group racist though. There was zero evidence of it prior to and after the comment. So… Why say it? It wasn’t a relevant part of the episode. I think you should leave those comments for times when you are truly trying to highlight the topic rather than just saying it for no reason other than possible ratings.

Really like this show! Good to see a show on the tube NOT meant for the younger generation. Hope it’s renewed!

I really enjoy The Unicorn! I feel that this sitcom is more united in so many ways!! I hope we will see many more seasons!!

Excellent show that is finding its footing. Walter Goggins is terrific & his interactions with his daughters is wonderful. It should be renewed for another couple of years to put them at ease & continue the storyline as it’s been towards the end. The season ending meet up will be a great carryover story as his new love interest was wonderful in “Justified”, so she’ll bring a likable character to the story. Watching his daughters grow & help him (and themselves) through their grief is a nice look on life when horrible events happen.

We nearly tossed the show at the beginning when the plots focussed on nothing but social media blabbering. When the writing finally mixed in the real world with the online, the show became palatable.

The Unicorn is a fun and sweet look at family life after a spouse passes away. I hope it will be renewed and look forward to the development of the characters and their friendships

Thus would a great show if you get rid of the annoying neighbors. They are going to ruin this show

Absolutely agree with you. I stopped watching after two episodes because the neighbors annoyed me especially the female doctor. Change the format!

Hope the Unicorn is a long running series

The Unicorn is very refreshing to watch. Enjoyed it very much!!