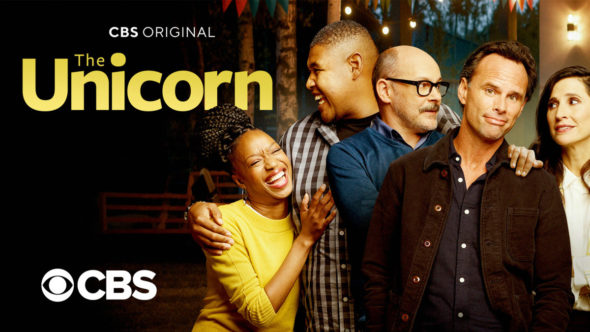 Last season, CBS cancelled Carol’s Second Act and Man with a Plan but chose to renew The Unicorn. Will this single-camera comedy continue to have good fortune or, will its luck run out? Will The Unicorn be cancelled or renewed for season three? Stay tuned. *Status Update Below.

The Unicorn stars Walton Goggins, Rob Corddry, Michaela Watkins, Omar Miller, Maya Lynne Robinson, Ruby Jay, Makenzie Moss, and Devin Bright. Following the loss of his wife, Wade (Goggins) is now the single parent to their adolescent daughters, Grace (Jay) and Natalie (Moss). With the encouragement of his kids and close friends like Forrest (Corddry), Delia (Watkins), Ben (Miller), and Michelle (Robinson), Wade decides to try dating again. To his amazement, Wade is told that he’s considered a hot commodity in the dating world and the perfect single guy, aka a “unicorn”. He’s employed, attractive, and has a proven track record of commitment. Thanks to the support of his little girls and his friends, Wade is hoping to find happiness again and puts himself and his healing heart out into the world.

For comparisons: Season one of The Unicorn on CBS averaged a 0.71 rating in the 18-49 demographic and 5.66 million viewers.

What do you think? Do you like The Unicorn TV series on CBS? Should it be cancelled or renewed for a third season?

Please bring back The Unicirn. Our faniky and friends love it.

Please please renew this show. It’s just wonderful, funny, touching, in a way reminiscent of Friends. Children are super believable actors . A family favorite every ThursdayWE LOVE IT. pLEASE bring it back.

My husband and I just discovered the Unicorn a few months ago and binge watched it. Look forward to each week’s show. Wonderful to have a nice uplifting family show that has warmth and humor!! We have many friends that also enjoy it. Please don’t cancel… The show itself is a Unicorn amongst other TV options!

Oh, I’m still mad at CBS for cancelling Tommy with Edie Falco. That did ok for a 10 PM show but still got the axe!

Complaining about other shows early demise isn’t a comment about this show. How about, the first season was good! The chemistry as a group was great even if relying on the dead wife was heavy handed. The second season is pretty bad from the beginning. Writing/stories are silly and poor and cringe comedy more prevalent. It’s now about individual story lines and character quirks even though characters somehow managed to all (even 7 kids) be together everyday? also suggesting a mom has 7hrs off a day because 4 kids are in school is ridiculous. I could go on about my… Read more »

I knew it would fail big time even after Mom! Only got renewed last season because behind Young Sheldon! They cancelled Carol’s 2nd Act & Broke for this?! CBS executives have no clue how to schedule!!