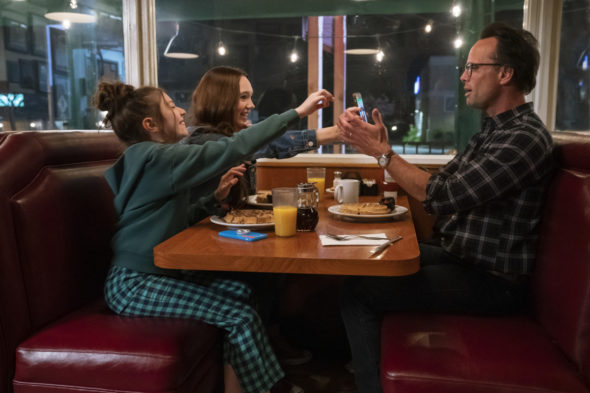 Can this freshman sitcom survive? Has The Unicorn TV show been cancelled or renewed for a second season on CBS? The television vulture is watching all the latest cancellation and renewal news, so this page is the place to track the status of The Unicorn, season two. Bookmark it, or subscribe for the latest updates. Remember, the television vulture is watching your shows. Are you?

A single-camera comedy series on CBS, The Unicorn stars Walton Goggins, Rob Corddry, Michaela Watkins, Omar Miller, Maya Lynne Robinson, Ruby Jay, Makenzie Moss, and Devin Bright. A year ago, Wade (Goggins) lost his wife and he is now the single parent to their adolescent daughters, Grace (Jay) and Natalie (Moss). With the encouragement of his kids and close friends like Forrest (Corddry), Delia (Watkins), Ben (Miller), and Michelle (Robinson), Wade decides to try dating again. To his amazement, Wade is told that he’s considered a hot commodity in the dating world and the perfect single guy, aka a “unicorn”. He’s employed, attractive, and has a proven track record of commitment. Thanks to the support of his little girls and his friends, Wade is hoping to find happiness again and puts himself and his healing heart out into the world.

The first season of The Unicorn averaged a 0.71 rating in the 18-49 demographic and 5.66 million viewers. Find out how The Unicorn stacks up against other CBS TV shows.

Will CBS cancel or renew The Unicorn for season two? The network has high standards for its sitcoms and I’m thinking that this one’s ratings aren’t good enough to score a renewal. I’ll update this page with breaking developments. Subscribe for free alerts on The Unicorn cancellation or renewal news.

5/6/20 update: The Unicorn has been renewed for a second season.

What do you think? Are you glad that The Unicorn TV show has been renewed for a second season? How would you feel if CBS had cancelled this TV series, instead?

The only actors on the whole Unicorn set that are believable in their roles are the two young daughters. All the rest of them SUCK! They ALL overact their parts to death. Really bad!!!

So happy there’s another season coming! Love the show!!

I am thrilled that there is a second season!

I think the show is corny and boring.

I love The Unicorn! I am so glad it’s been renewed! Fun from beginning to end. Good script. Good cast and acting.

I’m glad they renewed it. It is a good family show.

Really hope they make a second series of Unicorn!