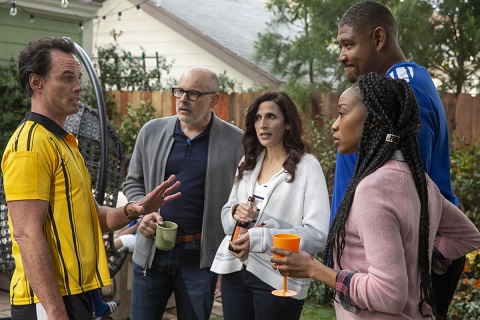 CBS is exploring the world of middle-aged dating. The network just announced they’ve ordered a new TV show for the 2019-20 season called The Unicorn.

Read more info about The Unicorn from CBS below:

A tight-knit group of friends and family help a widower move on following the most difficult year of his life, which includes being an ill-equipped but devoted single parent to his two daughters, and taking the major step of dating where, to his shock, he’s a hot commodity. Pictured: Left to Right: Walton Goggins as Wade, Rob Corddry as Forrest, Michaela Watkins as Delia, Omar Benson Miller as Ben, Maya Lynne Robinson as Michelle. Photo: Michael Yarish/CBS (C)2019 CBS Broadcasting, Inc. All Rights Reserved

What do you think? Are you a fan of Walton Goggins? Will you check out his new comedy?

It was a dumb show and the main chatacter was ugly and not goid actor! Please, couldnt there be something better?

Yes! Love Walton! Excellent actor and he has a lovely smile!

This show looks interesting, but I am very cautious and apprehensive in watching it. Dating one year after a significant loss…this is definitely a hope-filled story. Realistic? No. Not from my perspective after year 4 of the devastating loss of my spouse. Yes, people try to “fix you up” to fit whatever norm they feel needs to be filled. I hope the show is respectful and realistic regarding the pain endured when trying to come to grips with not wanting to let go, as others are trying to “fix you up” with someone new. Yes, humor should certainly be part… Read more »

Justified. Sons of Anarchy. Early In the Heat of the Night. Yup. Gotta watch.

My husband and I loved him in “Justified”. Have seen him in much more since…he has a quality in his acting that makes you buy into the character on a higher level. We will always follow his work.

He was great in Justified! Looking forward to his new show!

This will be on top of my new shows to watch list !!

Absolutely awesome!!! I loved him in the TV show “Justified”. Great actor.

I am a fan of Walton Goggins. I am looking forward to this.

Big fan of Walton Goggins. Will be interested to see his comedic chops.

My favourite actor!! Love Him

Absolutely! He is the best!!!