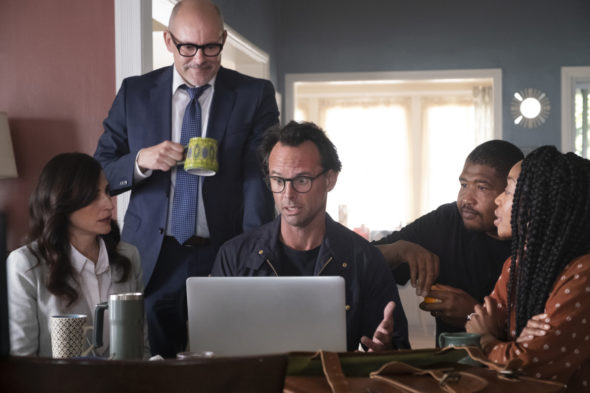 Last season, CBS introduced four new sitcoms and cancelled all but one of them. How will The Unicorn fare in the ratings? Will it be a rare beast and survive? Will The Unicorn be cancelled or renewed for season two? Stay tuned. *Status Update Below.

A single-camera comedy series, The Unicorn stars Walton Goggins, Rob Corddry, Michaela Watkins, Omar Miller, Maya Lynne Robinson, Ruby Jay, Makenzie Moss, and Devin Bright. A year ago, Wade (Goggins) lost his wife and he is now the single parent to their adolescent daughters, Grace (Jay) and Natalie (Moss). With the encouragement of his kids and close friends like Forrest (Corddry), Delia (Watkins), Ben (Miller), and Michelle (Robinson), Wade decides to try dating again. To his amazement, Wade is told that he’s considered a hot commodity in the dating world and the perfect single guy, aka a “unicorn”. He’s employed, attractive, and has a proven track record of commitment. Thanks to the support of his little girls and his friends, Wade is hoping to find happiness again and puts himself and his healing heart out into the world.

What do you think? Do you like The Unicorn TV series on CBS? Should it be cancelled or renewed for a second season?

I love this show and look forward to it every week. Funny, wholesome, realistic and I so identify with the premise: moving forward after widowhood. Please keep it on!

We really enjoy The Unicorn, the characters are awesome, it’s a fun show and really encourages friendships!

I always love Walton Goggins, but the rest of the gang are too lame. He is too great an actor to be lowered to the level of other cast. Walton Goggins is the ONLY reason I can tolerate watching the show…..I just want to keep seeing him on TV.

I enjoy this show very much! The storylines and actors are great! I look forward to seeing it each week!

Its a great show please dont cancell it…

I absolutely love the show the Unicorn. Walton Goggins as brilliantly cast as widower Wade the rest of the cast is brilliant as well. I love that the show is not overtly sexual nor violent. It’s wholesome because it’s about a man who truly loved his wife who’s friends truly I want the very best for him. These people really love and care for each other and that such a breath of fresh air to see in television these days. I would absolutely love to see 10 more seasons of the Unicorn. I hope that it is considered for renewal… Read more »

Agreed. I’m tired of watching fast moving, overly suspenseful or action oriented superhero, ghost busters typed dramas, Even stopped watching Supernatural after 11th or 12th season where they finally meet the god. It was one of my favorite shows back in the day but it doest go anywhere now. I like watching some true to the world dramas for a change like The Unicorn, Almost Family these should be continue to run otherwise we won’t have a reason to turn on the TV except sports!