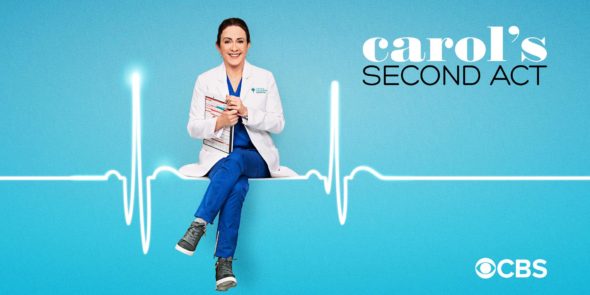 Veteran actress Patricia Heaton is best known for her roles on long-running sitcoms Everybody Loves Raymond and The Middle. However, she has also starred in comedy series like Back to You and Room for Two that have only lasted one season apiece. How will her newest CBS show perform in the ratings? Will Carol’s Second Act be cancelled or renewed for season two? Stay tuned. *Status update below.

A multi-camera sitcom, the Carol’s Second Act TV series stars Patricia Heaton, Kyle MacLachlan, Ito Aghayere, Jean-Luc Bilodeau, Sabrina Jalees, and Ashley Tisdale, with Lucas Neff recurring. This comedy series revolves around Carol Kenney (Heaton), a woman in her 50s who has embarked on a unique second act after raising her children, getting divorced, and retiring from teaching. She pursues her dream of becoming a doctor. On Carol’s first day at work at Loyola Memorial Hospital, she’s prepped with an abundance of life experience, people skills, talent, and enthusiasm — advantages that her co-workers don’t immediately appreciate.

What do you think? Do you like the Carol’s Second Act TV series on CBS? Should it be cancelled or renewed for a second season?

The show was just getting really good and now you’re canceling it ? I Like Carol so much more with her having a boyfriend, and then you find out the other doctor has a crush, then you bring in her ex husband Kelsey Grammer. Could not wait to see how that would all go.
The problem with the show was her being the mom to the young interns. Showed Patricia Heston’s REAL talent bringing in more adults as main characters.
REALLY should give this show another chance as it was just getting good. ‍♀️

The show is so refreshing. All people on the
Show work so well with each other. It also teaches
Some of life’s lessons. It is one of the
Best Comedy right up there with The
Neighborhood.

These ratings look pathetic. It’s likely going to be cancelled. Seriously, a 0.8 share in the 18-49 demographic puts it on the bubble, and it’s not even reaching that! This is going to be a one-and-done series.