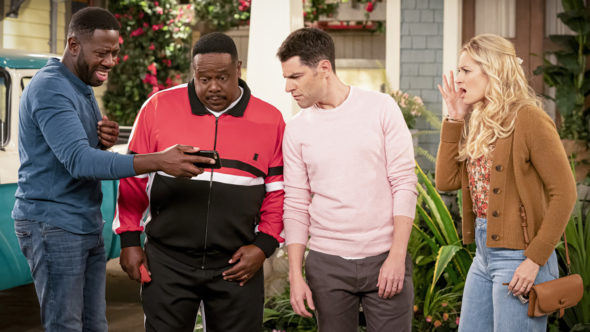 Welcome back to The Neighborhood for season three. CBS just announced they’ve renewed the TV show for the 2020-21 season.

The second season of The Neighborhood averaged a 0.90 rating in the 18-49 demographic and 6.25 million viewers. Compared to season one, that’s down by 20% and 3%, respectively.

Still, even with the ratings dip, The Neighborhood is CBS‘ third highest-rated TV show for the 2019-20 season. Season two wrapped on Monday night.

What do you think? Do you watch The Neighborhood TV show? Will you watch season three on CBS?

We loved previous seasons the family could sit down, eat popcorn, laugh and watch. It was a sitcom that younger kids could watch and learn from. What I mean Calvin had problems with Dave being white. The more time they were together, a kinda friendship was starting to develop. You could talk to your children about it. Now as you said yourself “it’s not recommended for younger children”! There’s anger, violence and sigins of rioting. Don’t you think we see enough of that each everyday. What was bad you didn’t even take up for the good police officer’s. If so… Read more »

I just deleted the season three opening show and cancelled the series from my DVR. Sitcoms are supposed to be entertaining not piss you off. if I wanted to be white shamed like that I could tune into CNN. Cancel CBS!!! Thanks for ruining a show that was good.

This show is such a breath of fresh air. FUNNY FUNNY FUNNY! The actors are each perfect in their rolls and the writing brings out the best of each character. My husband and I are over 50 and we are sick to death of shows that are appealing and enjoyable to OUR “demographic” getting cancelled. Your decision to cancel Happy Together was an egregious error in our opinion. Please let us have this. The over 50 crowd are people too!

The Neighborhood is a clean comedy show. All my family enjoy it and watch it weekly; we absolutely love it! The characters are fabulous! We hope it stays on for many more seasons. We were extremely disappointed when it did not show tonight- October 12, 2020.
We need more clean comedy like The neighborhood on TV.
Thank you very much!

neighborhood is a very funny quality show and We should plan to have. How many more seasons?. Actors, all of the actors are great. Where have they been hiding? This is the greatest show. Let’s try to do more like it and let’s plan for more of the seasons. . Everybody don’t like the other foolishness that’s on TV now all the reality shows and craziness people like quality television.