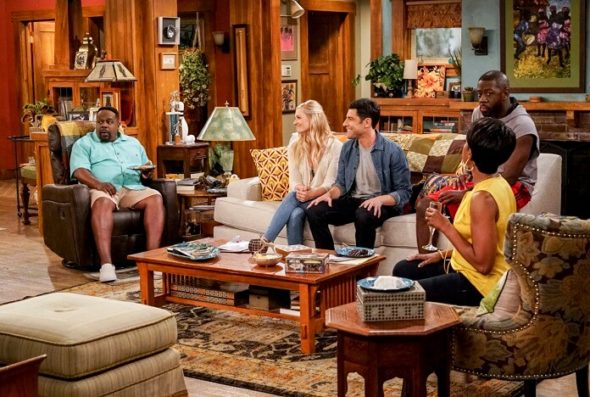 The Neighborhood is here to stay. CBS just announced they’ve renewed the TV show for a second season.

The sitcom centers on professional conflict negotiator Dave Johnson (Max Greenfield), who moves with his family to the Los Angeles area, after his wife, Gemma (Beth Behrs), land a job as a school principal. The Johnsons’ new next-door neighbor, Calvin Butler (Cedric the Entertainer) is generally suspicious of outsiders and worries Dave will mess up the predominantly black community’s dynamics.

It’s not a huge surprise that CBS has given a season two to The Neighborhood. The freshman comedy has been performing well in the ratings since its October 2018 debut.

CBS also renewed two other freshman shows – FBI and Magnum PI — for the 2019-20 season. “Each of these distinctive shows has made their mark in a variety of ways,” said Kelly Kahl, President, CBS Entertainment. “Our goals this season were to introduce new series that audiences are passionate about, add more strength to a winning schedule and create more inclusive programming.” Thom Sherman, Senior Executive Vice President of Programming added, “We’re thrilled by the creative direction and performance of these three shows as they continue to grow in popularity and resonate with the Network’s viewers.”

What do you think? Have you seen The Neighborhood? Will you watch season two?

Awesome show. The ladies be having me in tears. Especially the wash cloth scene.

I’m so glad that there is a season 2, It reminds me so much of the Jeffersons and All in The Family – a simpler time when everyone didnt have to be screaming and fighting to voice their opinions and nobody had to fight to the the death to speak their mind. The internet and social media has attempted to destroy stand up comedy. I love this show. Thank you for bringing such a great show to tv and for bringing it back for another season. Long live the politically incorrect comedians and comic relief that encourages real conversations and… Read more »

I’m so glad that there is a season two, I love this show. Thank u for bringing such a great funny show and for bringing it back for another season..