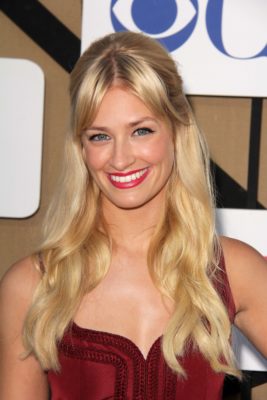 The sitcom stars Max Greenfield as Dave Johnson, “the friendliest guy in the Midwest [who] moves his family to a neighborhood in Los Angeles where not everyone looks like him or appreciates his extreme neighborliness.” Cedric the Entertainer also stars.

On The Neighborhood, Behrs will play Gemma, Dave’s (Greenfield) wife who “accepts a teaching promotion that requires the family to relocate to Pasadena.” Dreama Walker previously played the role in the CBS pilot.

What do you think? Are you a fan of 2 Broke Girls? Will you check out The Neighborhood?

I think this re-casting is a mistake given how badly CBS had screwed-over Beth Behrs’s previous sitcom on the network, “2 Broke Girls”. I’d have been fine with this if CBS gave “2BG” a proper wrap-up season during 2017-18. Yes, I was a fan of “2BG”, and because “2BG”‘s cancellation was so unexpected, I didn’t think any of its main cast should be starring in another CBS series again. Because of this, I refuse to watch “The Neighborhood”, no matter how long it runs. I wish a different actress had been cast, or Dreama Walker had stayed past its pilot,… Read more »

Well good for her but I WAS hoping to see a series finale for 2 Broke Girls where it ends with 2 Rich Girls.No I won’t check it out because to be honest it sounds like every freaking other “neighborhood” show on TV. There are at least 1200 or so.2 Broke Girls was original…this sadly is not.