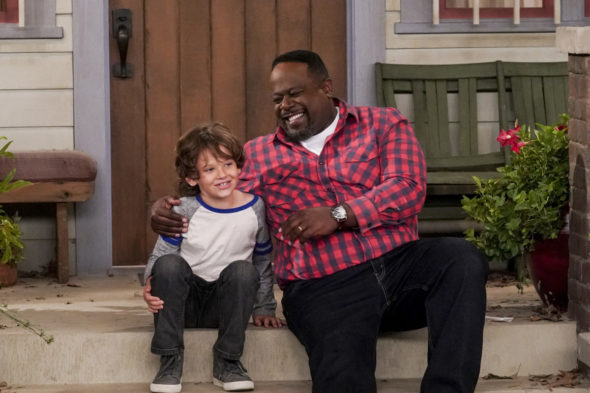 How well are Gemma and Dave Johnson fitting in during the first season of The Neighborhood TV show on CBS? As we all know, the Nielsen ratings typically play a big role in determining whether a TV show like The Neighborhood is cancelled or renewed for season two. Unfortunately, most of us do not live in Nielsen households. Because many viewers feel frustration when their viewing habits and opinions aren’t considered, we’d like to offer you the chance to rate all of The Neighborhood season one episodes here.

A CBS sitcom, The Neighborhood stars Cedric the Entertainer, Max Greenfield, Sheaun McKinney, Marcel Spears, Hank Greenspan, Tichina Arnold, and Beth Behrs. The story centers on professional conflict negotiator Dave Johnson (Greenfield), who moves with his family to the Los Angeles area, after his wife, Gemma (Behrs), land a job as a school principal. The Johnsons’ new next-door neighbor, Calvin Butler (Cedric the Entertainer) is generally suspicious of outsiders and worries Dave will mess up the predominantly black community’s dynamics. Fortunately, Calvin’s wife Tina (Arnold) is far more gracious. She and their sons do their best to make the new family feel at home.

What do you think? Which season one episodes of The Neighborhood TV series do you rate as wonderful, terrible, or somewhere between? Should CBS cancel or renew The Neighborhood for a second season? Don’t forget to vote, and share your thoughts, below.

This is the ONLY show on the regular channels I really look forward to. I like Man with a Plan and am going to miss the Big Bang. If they cancel it, I give up on regular tv. I spend most of my viewing on reruns of The Office and even Seinfeld. That is how far back I have to go to watch something actually worth watching.

This tv show so fuuny. I ended up subscribing to cbs network just to watch this show. Its my daughter and i love this show. We both laugh and bound. She is a mix child. So she see the difference and understand. I wish the rating would show the quality.

Love this show.I didn’t watch it at first but went back and caught up on 1st season from the beginning.Love it . Ring it back for another season.

I love this show!!!! Grover is hilarious and the chemistry and timing of the characters is perfection!!

This is one of the best comedies in a long time if you ask me. The way the two families relate to each other, how Calvin interacts with his two sons and Dave, Calvin’s determination not to admit he likes his neighbors is hilarious. I find myself exploding into tears of laughter throughout nearly every episode. Dave, Gemma, Calvin’s wife, and Calvin’s characters play off of each other so well as do their lifestyles with Dave being into veggies and eating healthy along with trying to counsel Calvin, Gemma’s often straight laced and sometimes rigid feelings about things blends great… Read more »

This is by far the best new show! It is non stop laughs line by line. Please renew this show for many seasons to come.

This is the Best Show my husband and his mom agree.
We watch this every week and are so excited just to see the next show.
So keep it going Please.

BEST show on TV!!!! Love it. So funny. We could use more shows like it.

Hi, this is Harold. I loved the show very much, it made me laugh. There was a mention of a mother at the beginning, I do not know if she is going to appear or if she has been cast, but if she is going to make an appearance, could Angela Cartwright play the part. She would do a great job. I know you are probably considering several names, just please keep her in mind to. She would be great for the show. Once again, I did love the show and will be looking forward to the next one. God… Read more »