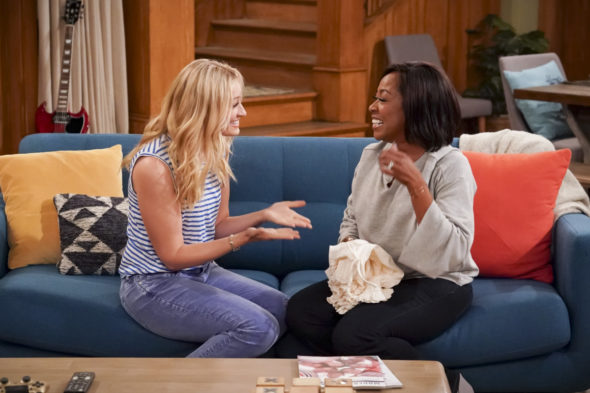 Airing on the CBS television network, The Neighborhood stars Cedric the Entertainer, Max Greenfield, Beth Behrs, Tichina Arnold, Sheaun McKinney, Marcel Spears, and Hank Greenspan. This sitcom begins when a very friendly guy and his family — professional conflict negotiator Dave Johnson (Greenfield), school principal Gemma (Behrs), and their young son, Grover (Greenspan) — move to a community in Los Angeles that’s quite different from their Michigan small town. Their opinionated next-door neighbor is Calvin Butler (Cedric the Entertainer), a family man who’s wary of the newcomers. However, Calvin’s family feels very differently. His gracious wife, Tina (Arnold), rolls out the welcome wagon while sons Marty (Spears) and Malcolm (McKinney) think the Johnsons will be good for their family and the community. Despite their differences, can the Johnsons and Butlers become true neighbors and friends?.

What do you think? Which second season episodes of The Neighborhood TV series do you rate as wonderful, terrible, or somewhere between? Should CBS cancel or renew The Neighborhood for a third season? Don’t forget to vote, and share your thoughts, below.

*5/6/20 update: The Neighborhood has been renewed for a third season.

I’m sorry I didn’t catch all of the first season. I did watch every episode of the second season. I love Calvin. He’s so funny. Can’t wait to see Dave as an elected official in season 3.

I think you have to be young to enjoy watching this.

I love this show. It’s so funny.

The Neighborhood is an excellent one of the best they have had in awhile besides Big Bang Theroy.

The neighborhood really isn’t funny. Not a good show for cbs.

This show is getting better and better. Seems that it took a bit of time to find it’s feet, but the comedy has picked up. i think the writers can get it together and get more laughs in there. PLEASE keep it going, it’s starting to get much better. The Christmas show was REALLY funny. I agree with MARC, they do need a pet on there, or Calvin deciding to fix up a classic car or truck. But Please keep it going. 🙂

Please keep ‘The Neighborhood’ on for another season. It is a good show. Could use more jokes to be more fun. It is annoying to see Dave being constantly put down by Calvin. We like the two brothers (Calvin’s sons), jokes that go back and forth and also Grover is a funny kid on the show. Sometimes the writing gets too silly and not believable, but it is all tolerable. Love also when Calvin’s wife gets him to admit he likes Dave. Maybe the show could use a funny pet somewhere? The episode with the parrot flying into the houses… Read more »

Some reason the writing has gotten terrible. It was watchable in the beginning of the first season but this season seems to take the wrong turn. I’ve stop watching this program because it’s not watchable in my mind anymore. What’s with the writersthis year with this TV shows it seems like they lost touch with people and just writing pure junk.

Some reason the writing has gotten terrible. It was watchable in the beginning of the first season but this season seems to take the wrong turn. I’ve stop watching this program because it’s not watchable in my mind anymore. What’s with the riders this year with this TV shows it seems like they lost touch with people and just a ride and pure junk

didnt like it at all the first season, tried to watch the premiere this year, sorry not funny to me, wont be watching at all

Love this show! Glad it’s back to new episodes!