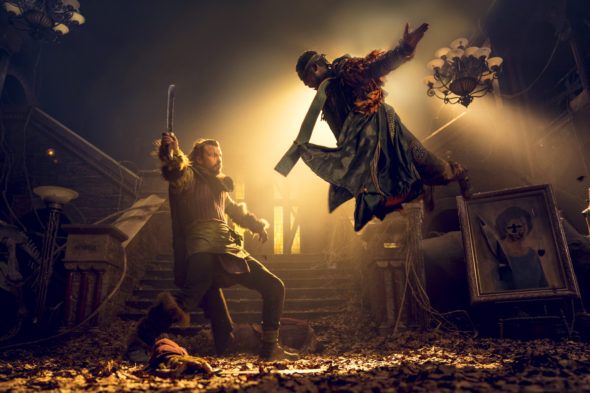 How bad do things get during the third season of the Into the Badlands TV show on AMC? As we all know, the Nielsen ratings typically play a big role in determining whether a TV show like Into the Badlands is cancelled or renewed for season four. Unfortunately, most of us do not live in Nielsen households. Because many viewers feel frustration when their viewing habits and opinions aren’t considered, we’d like to offer you the chance to rate all of the Into the Badlands season three episodes here. *Status update below.

Season three kicks off after Veil’s death. Sunny (Wu) and his son, Henry, are living off the grid, when the baby takes ill. Sunny teams up with Bajie (Frost) to journey back into the Badlands, where The Widow (Beecham) and Baron Chau (Matsuura) are engaged in a protracted war. Meanwhile an enigmatic nomad, Pilgrim (Ceesay), arrives with claims of ushering in a new era of “peace.” Soon, enemies will ally themselves to defend the Badlands.

What do you think? Which season three episodes of the Into the Badlands TV series do you rate as wonderful, terrible, or somewhere between? Should AMC cancel or renew Into the Badlands for a fourth season? Don’t forget to vote, and share your thoughts, below.

*2/10/19 update: AMC has decided to end Into the Badlands so there won’t be a fourth season.

They should kindly please renew it for us, the show was interesting and at the season 3 finale, we know more are yet to come

Into the badlands is one of the best Netflix show or season that I have ever seen since Bruce Lee fought Chuck Norris. We the people would like into the badlands back on Netflix and continue to season 4 and many more. This can not be the end of what America knows is great to watch. INTO THE BADLANDS. We need more. Dont let it end this way. PLEASE ❤.

Why do y’all always cancel great shows. Bring Into the Badlands back.