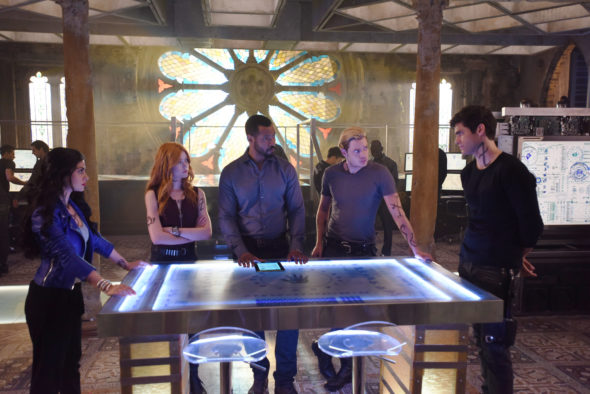 Are Clary Fray and the Shadowhunters still fighting the good fight during the third season of the Shadowhunters TV show on Freeform? As we all know, the Nielsen ratings typically play a big role in determining whether a TV show like Shadowhunters is cancelled or renewed for season four. Unfortunately, most of us do not live in Nielsen households. Because many viewers feel frustration when their viewing habits and opinions aren’t considered, we’d like to offer you the chance to rate all of the Shadowhunters season three episodes here.

A Freeform supernatural drama based on The Mortal Instruments book series by Cassandra Clare, Shadowhunters stars Katherine McNamara, Dominic Sherwood, Alberto Rosende, Emeraude Toubia, Matthew Daddario, Isaiah Mustafa, Alisha Wainwright, and Harry Shum Jr. The series centers on Clary Fray (McNamara) who, upon turning 18, learned she is from a long line of demon hunters called “Shadowhunters.” In season three, the Shadowhunters and Downworlders try return to normal, in the wake of Valentine’s death, but everyone is keeping secrets, which never ends well.

What do you think? Which season three episodes of the Shadowhunters TV series do you rate as wonderful, terrible, or somewhere between? Should Freeform cancel or renew Shadowhunters for a fourth season? Don’t forget to vote, and share your thoughts, below.

What bothers me about the whole ratings system is that it doesn’t count people who watch on TiVo after a certain # of days. And I feel they should could on all the platforms across all nations for each episode for at least two weeks how many times that episode was watched on each platform. If that was the case, #Shadowhunters would kill the ratings across the world every episode. Because I know I’m not the only one who does that. We all miss things, bc each episode is so amazing and intricate we want to make sure we catch… Read more »

I enjoyed the ending of shadow hunters. They did what they could to wrap it up nicely and even left it where another network could continue this phenomenal show. So many stories that can continue and branch off. I’d love to see Jace and Clary starting again. Such a great show. I will always be a shadowhunter fan.

Please please please keep Shadowhunters alive! Don’t cancel it! I love it so much. I stopped watching it for a while now I’m back on it watching season 3 and I can’t believe it will be the last. This has been the best season yet I think and there is so much more story to tell!! Please listen to the fans and keep it on even if you have to lower the budget the true fans won’t care !

Love, love this show. One of my all time favs. I have read all the books & was so happy to discover it had been made into a series! Very well cast, this show is a big winner in my book!

Noooo! I love this show. Cassandra Clare did fantastic creating this series and there is so much more to come. Shadowhunters was such a unique and great idea. It’s the only show I look forward to watching. I buy the each season on Amazon, I hope that didn’t hurt the ratings 🙁 I don’t have cable. We use the fire stick. Please keep shadow hunters going!

PLEASE KEEP SHADOW HUNTERS GOING , I’M SO EXCITED FOR SEASON 4&5 I’VE READ AND OWN ALL THE BOOKS OF THEM ! I’LL BE HEARTBROKEN IF CANCELLED!! FREEFORM DON’T DO THIS TO US !!

I love to see season 5,I love the show . I won’t watch freeform anymore!

I love this show i hope they dont cancel it