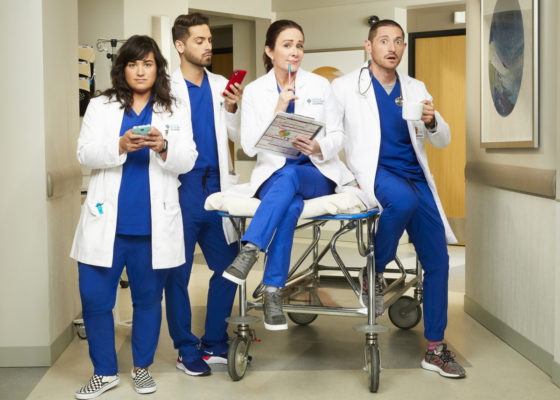 TV show description:
This comedy series revolves around Carol Kenney (Heaton) who has embarked on a unique second act after raising her children, getting divorced, and retiring from teaching. She pursues her dream of becoming a doctor.

On Carol’s first day at work at Loyola Memorial Hospital, she’s prepped with an abundance of life experience, people skills, talent, and enthusiasm — advantages that her co-workers don’t immediately appreciate.

Carol’s first-year partners on rounds are Dr. Lexie Gilani (Jalees), who’s very nervous due to the pressure of her being the first in her family to go to college; Dr. Daniel Kutcher (Bilodeau), a 2018 Harvard Medical School grad who’s already been twice-published in the New England Journal of Medicine; and insecure Dr. Caleb Sommers (Neff). Their chief resident is Dr. Maya Jacobs (Aghayere), an all-business disciplinarian who doesn’t particularly care for Carol’s outgoing nature.

Fortunately, Carol has a couple of friendly faces at the hospital. Dr. Stephen Frost (MacLachlan) is the accomplished senior attending physician and finds her charming. Carol’s bubbly daughter, Jenny (Tisdale), is a successful pharma sales rep who catches the eye of Carol’s fellow doctors.

Series Finale:
Episode #18 — R.I.P. Dr. Herman
When Carol is selected to present a case to the entire hospital, her boyfriend, Dr. Lewis (Patrick Fabian), asks her to reconsider because it could affect his chance of becoming chief of staff over Dr. Frost. Also, Dr. Frost makes a startling revelation.
First aired: March 12, 2020.

What do you think? Do you like the Carol’s Second Act TV show on CBS? Do you think it should have been cancelled or renewed for a second season?

Unbelievable! Every time a sitcom is created that’s worth any salt, they cancel it. It’s a shame that those of us who can, and do, recognize and appreciate their value, have to suffer because of the general superficial masses who don’t. Unfortunately, and as usual, popularity gets the vote instead of creativity and uniqueness. Please don’t cancel Carol’s Second Act; it’s development has been fun to watch, and I think it’s earned it’s spot for at least a second season. Anyone out there remember “Pushing Daisies “?? The world is the world…hard for artists to survive.

I’m furious every time we get a family friendly program it gets canceled. This is a disgrace. I truly enjoyed it. I’m a huge fan of Patricia Heaton and Ashley Tisdale.
Why why why???

I thought it started out slow. Almost stopped watching , but like her. Gave it 4 episodes. Got used to other characters and she calmed down. People need lives outside Hospital.
Such a great last episode. Could not wait for 2nd season.

I really like this show…not crazy about some of the younger people but Patricia Heaton is good & I think Kelsey Grammar would have been good as her superior. They should give it another season to see.

This show is refreshing and funny. Please do not cancel this show !!! Watch it every week on Hulu.

I love this show already. It is laugh out loud funny without being crude, crass or vulgar which is rare for sitcoms on prime time in today’s day and age.

liked this show, its good to see an actual comedy, instead of a show with no audience trying to be funny

We were sooooo disappointed. It wasn’t good or funny. She’s so much better than that. Hope it improves. We’re going to give it one more try.