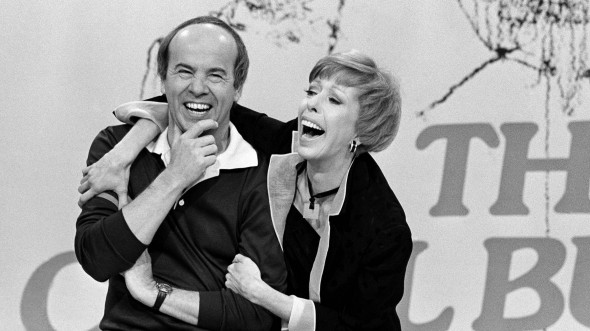 The Carol Burnett Show has a big birthday coming up. Today, CBS announced they are celebrating the TV show’s 50th anniversary with an upcoming two-hour special.

The landmark variety show, which featured the comedic talents of Burnett, Tim Conway, Harvey Korman, Vicki Lawrence, and Lyle Waggoner, debuted on September 11th, 1967. The series ran for 11 seasons before ending in 1978.

On December 3rd at 8 p.m. ET/PT, CBS will air a two-hour special in honor of The Carol Burnett Show‘s 50th anniversary. The special will feature Burnett, original cast members, and other celebrity guests as they discuss the groundbreaking series.

Filming on Stage 33 at CBS Television City in Los Angeles, the show’s original soundstage, Burnett will reminisce about her favorite sketches, Q&As with the studio audience, guest stars, her memorable wardrobe and bloopers, as well as the tremendous effect the show continues to have on television today as a true pioneer of sketch comedy.

“I can’t believe how fast the time went, and what makes me the happiest is that so much of the funny stuff we did still holds up today, and we can share it with generations to come,” said Carol Burnett. “What a great ride!”

“‘The Carol Burnett Show’ was a comedy showcase that was years ahead of its time. If social media existed then, clips from the broadcast would have quickly gone viral,” said Leslie Moonves, Chairman and CEO, CBS Corporation. “We are very proud of the show’s significant place in CBS’ legacy, as well as in television history, and we look forward to this primetime celebration of incredible talent, led by the incomparable Carol Burnett.”

The special will also feature original cast members Vicki Lawrence and Lyle Waggoner, costume designer Bob Mackie, as well as other comedians, comic actors and friends, including Jim Carrey, Kristin Chenoweth, Stephen Colbert, Harry Connick Jr., Bill Hader, Jay Leno, Jane Lynch, Bernadette Peters, Maya Rudolph and Martin Short, among others, who will join Burnett to discuss how the revolutionary series paved the way for them and impacted their careers.

“The Carol Burnett Show” premiered on Sept. 11, 1967 and starred Carol Burnett, Harvey Korman, Vicki Lawrence, Lyle Waggoner and Tim Conway. Airing for 11 seasons and a total of 276 episodes, the show earned a total of 25 Primetime Emmy Awards, including three for Outstanding Variety-Music/Comedy Series. In addition, the show earned eight Golden Globe Awards, including one for Best Television Show – Comedy or Musical, and Burnett received four for Best Actress – Comedy or Musical.

What do you think? Are you a fan of The Carol Burnett Show? Will you watch the 50th anniversary special?

So sad that Tim Conway wasn’t part of the special. He was one of my favorites!

Of course we are watching, I’m curious about Tim as well, I hope they mention why he’s not on.

Tim Conway is still with us. Why isn’t Tim included in the special?

Carol made a brief vague statement. I suspect he’s far too ill to come on (I have no idea if he has something like Alzheimer’s).

I remember watching the show faithfully then and will watch it now.I love Carol Burnett.
Loved her smile. Her laughter was always from the belly.When she laughed it made me laugh to.

The closest we have, today, to a ‘variety’ show is America’s Got Talent…and it will be wonderful to celebrate ‘The Carol Burnett Show’ 50th Anniversary with her.
Variety and good clean comedy is sorely missing in today’s ‘entertainment’ industry.

Well, I’m dating myself, but I grew up watching variety shows, such as Carol B. Donny & Marie, Sonny & Cher, Dean Martin Variety (as well as his celeb roasts)
definitely pre-PC days. Lots of actual TALENT & improv. not dependent on smut.
Ahh yes, the GOOD ole days of REAL “entertainment.”

I used to watch all of those shows too, and loved them. I cannot say the same about today’s reality shows.