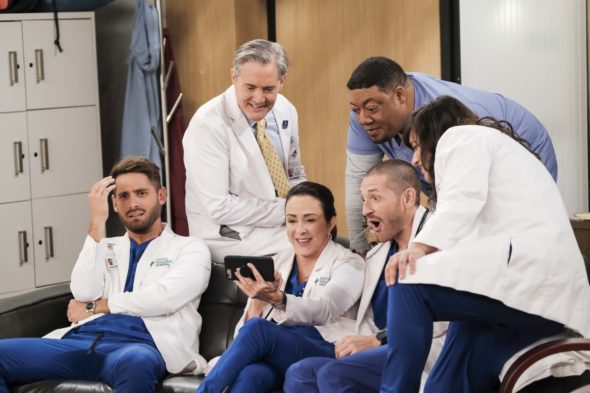 What do you think? Which season one episodes of the Carol’s Second Act TV series do you rate as wonderful, terrible, or somewhere between? Do you think that Carol’s Second Act on CBS should be cancelled or renewed for a second season? Don’t forget to vote, and share your thoughts, below.

Boy, do I feel like a loser. You are cancelling three of my favorite shows! Carol’s Second Act, Tommy and Man With a Plan! Lately they are what has been keeping me going! Please reconsider. Patricia Heaton is one of the best comedians on tv recently. And any tyme I can watch Edie Falco in something, I am there! Of course, I love Matt LeBlanc. The cast is is great too! Kevin Nealon, Stacey Keatch, and Liza Snyder, and Swoosie Kurtz ! Please rethink thiscancellation!

I love this show! I used to watch almost all CBS because you had such good shows. You’ve cancelled God Friended Me , Carol’s Second Act AND Tommy (another great show!) . What is wrong with you people?! I guess you don’t like shows with comedic content and compassion. I guess next you’ll cancel The Neighborhood and Bob Hearts Abishola. They are much too fun for CBS. I am so disappointed in all of you. Why didn’t you try different time slots or days? Something! You could have put some of them on Tuesday or Wednesday when there is nothing… Read more »

It was one of the worse shows on TV, I wanted to like it but it was terrible. could not watch past the 2nd episode.

My Thursdays will NOT be complete without this show. We could relate to the Doctor’s lives. All actors were so natural in the medical environment. They really made people connect and respect our first responders like never before. And at the same time laugh right along with them. We were never able to connect with medical personnel like this before. I pray someone else picks up this show. My friends and family totally loved it. If you cancel this show, I guarantee that will be one of your biggest mistakes. Also, now that people will probably be looking for another… Read more »

We LOVE Carol’s Second Act! There aren’t nearly enough shows like this on tv. When Everybody Loves Raymond wrapped, I was so bummed. I’m so glad to see Patricia Heaton back and she is back to her old ( young) self again! Please don’t cancel it, that’s the only show we watch on CBS and it’s awesome!!!

I think this show is lousy and boring…

Do not cancel ‘Carol’s Second Act’, it is a good show! The First show seemed like all of the characters were getting their footing, and now the writing is very funny! All of the actors are fantastic! Each character has a past story and all are great! We were sad to see Eddie leave the show when his liver transplant failed and his body rejected the liver. Hope to see new patients and some of the interns meet new people and have even more fun with this show. The writers are great! We need Comedy shows more then extreme detailed… Read more »

I love Carol’s Second Act.. With all the crazy reality shows and drama series that leave you feeling sad and depressed, Carol’s Second Act makes you happy … Patricia never disappoints, and all the rest of the actors are incredible and make this show … perfect.. I hope there is a second season and many more. I also love how some of the episodes are taking the characters out of the hospital so you can see their lives outside of the workplace. This show can be another hit…. given the chance… it has already evolved. For example, when Eddie the… Read more »

Carol’s second act is so bad. Hopefully it will not be renewed.