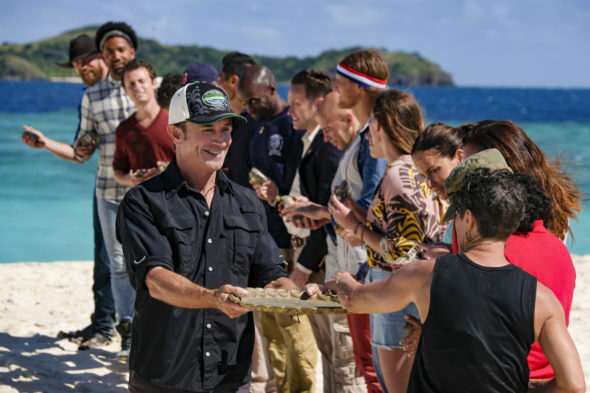 Will there be twice as much back-stabbing in the 40th season of the Survivor TV show on CBS? As we all know, the Nielsen ratings typically play a big role in determining whether a TV show like Survivor is cancelled or renewed for season 41. Unfortunately, most of us do not live in Nielsen households. Because many viewers feel frustration when their viewing habits and opinions aren’t considered, we invite you to rate all of the 40th season episodes of Survivor here. *Status Update Below

What do you think? Which season 40 episodes of the Survivor TV series do you rate as wonderful, terrible, or somewhere between? Do you think that Survivor should be cancelled or renewed for a 41st season on CBS? Don’t forget to vote, and share your thoughts, below.

OMG is this still being televised??? So sick of seeing this show even when advertising upcoming episodes. Get rid of this!!

Did not watch the opening episode…..in fact, I won’t be watching ANY episode. I am beyond sick and tired of seeing the same old faces return over and over again. This used to be my favorite show. I couldn’t wait each week for it to come on. We had a community group going that discussed the episodes. So much fun……but then the crappy ‘returning player’ shows started, and it’s been downhill from there. Naked and Afraid is my go-to now. It’s a real show. They will probably go the same way as Survivor one day as well, but by then… Read more »

Super excited To see this season! All my favorites going head to head! Go Boston Rob! Love the competition between Sandra and Rob! It’s gonna be a doozy if they last to the end!

Super excited for this new season of survivor! Love the battle between Boston Rob and Sandra!

I LOVE SURVIVOR! Just wish they would stop putting on people who’ve been on there before. There are a lot of others out there who would love to win a million dollars!
The Amazing Race is my absolute favorite show though when it comes to competition!