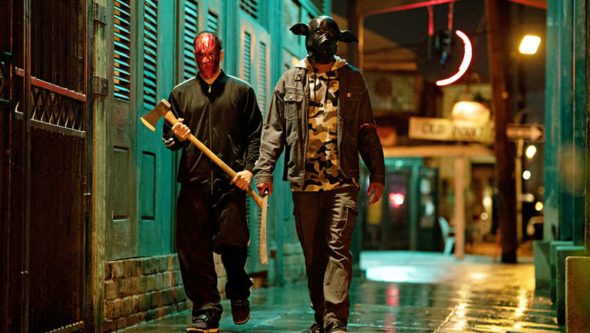 USA Network continues to purge its schedule of scripted TV series and, appropriately enough, that includes The Purge. The anthology horror show has been cancelled and won’t be returning for a third season.

The Purge TV show stars Derek Luke, Max Martini, Paola Nunez, and Joel Allen. Based on the movie franchise by James DeMonaco, the drama unfolds in the United States, which is under totalitarian rule. The story centers on a 12-hour period during which all crimes, including murder, are legal. The second season explores how a single Purge night affects the lives of four interconnected characters over the course of the ensuing 364 days, all inevitably leading up to the next Purge.

The second season of The Purge averaged a 0.22 rating in the 18-49 demographic and 562,000 viewers. Compared to season one, that’s down by 46% and 48%, respectively. While that was a huge decline, the series was still USA’s second-highest-rated scripted series.

The Purge is the latest scripted series cancellation for USA. The channel also cancelled Treadstone today and dropped Dare Me a couple of weeks ago. This leaves only the fates of The Sinner and Briarpatch up in the air.

What do you think? Did you enjoy The Purge TV series? Are you sorry to hear that there won’t be a third season?

Awe I really enjoyed that show

Absolutely loved the show! Season 2 was a bit dry but I get that they were showing the “behind the scenes” kind of stuff and the story lines of people involved directly. I was waiting for season 3! 🙁

Awe I really enjoyed that show so much. I love the movies, the show was the cherry on top. So sad to hear it’s been cancelled i hope theres still some magic way for it to be renewed. I rather have the purge than American horror story that should get cancelled. Purge Purge Purge Purge!!

I think the Purge should get a 3rd season!! I really looked forward to watching it every week!! I wish Netflix would pick it up like they did Lucifer.

Season three of the purge needs to be renewed instead of canceled It is easily the best USA network original programming.

It was okay but the movie was the best. Sometimes another movie is good and not an on going thing
Sorry everyone just saying you can take a good thing and ruin it with a series

I am sooooooooooo upset!!! I love love loooove this show!!

Why cancel the Purge! I like the show! People only think about ratings. Yes you want good ratings but you take away the shows we like without any regard to us!!!!

Another good series cancelled. What a waste of time. Do these companies actually want to listen to their viewers

Some other network, maybe Youtube Red needs to pick this up.

Why cancel The Purge??? Any time you have a great series you cancel it after 1 or 2 seasons. This isn’t the first time USA has done this. I just won’t be watching anything on this station again. Very disgusted!!!!!!!!!!

Heheh gotcha, this is why you canceled ‘Colony‘. USA is totally canceling everything. One of the most untrusted networks.
I never watched this show but warned viewers via TVSeriesFinale in previous years.