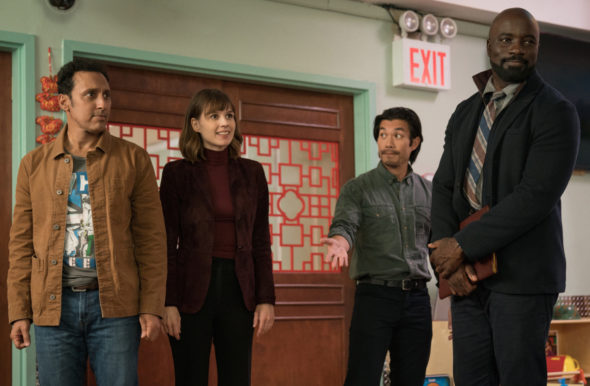 Apparently, being evil isn’t so bad. While NBC has cancelled Sunnyside and likely cancelled Bluff City Law, CBS has given an early second-season renewal to its new Thursday night drama, Evil.

Airing on Thursday nights, Evil stars Katja Herbers, Mike Colter, Aasif Mandvi, Michael Emerson, Christine Lahti, Kurt Fuller, Brooklyn Shuck, Skylar Gray, Maddy Crocco, and Dalya Knapp. A forensic psychologist, Kristen Bouchard accepts a job offer from David Acosta (Colter), a former adventure-seeking journalist. He’s now studying to be a Catholic priest and has been tasked by the Church to assess unexplained phenomena. Acosta also recruits Ben Shakir (Mandvi), an even-tempered realist with carpentry skills. He uses those abilities to uncover practical rationales behind “hauntings.” Kristen is certain that science can provide answers to every incident that the trio encounters — until she meets Leland Townsend (Emerson). He’s a sinister man who oozes menace and threatens Kristen and her four young daughters (Shuck, Gray, Crocco, and Knapp). Undeterred, Kristen, David, and Ben set out to assess inexplicable events to see if there’s a logical explanation or if something truly supernatural is at work.

The first season of Evil is currently averaging a 0.62 rating in the 18-49 demographic and 4.04 million viewers. In the Live+Same Day ratings, it ranks 17th out of 20 scripted series in the demo and 19th in viewers. It’s worth noting that the series airs at 10 PM and has been airing opposite Thursday night football, which draws high ratings.

Season one of Evil will wrap with 13 episodes. The season finale will air on January 30, 2020.

“These terrific new series have attracted a passionate base of viewers and consistent ratings while delivering entertaining, inclusive and relevant storytelling every week,” said Kelly Kahl, President, CBS Entertainment. “They’re off to strong starts and are still being discovered on the many catch-up and playback options available to our viewers today. We’re proud of this freshman class and excited about their potential to tell more great stories and further expand their audiences.”

What do you think? Have you been watching the new Evil TV show? Are you glad that there will be a second season?

LOVE LOVE LOVE “EVIL” ! ha Just cannot handle the young girls all yammering at the same time and mom? does nothing?!

You don’t know how happy that makes me.

Loving this series so far, we are up to episode 8 and happy to hear it’s renewed. REALLY GOOD NEWS!

Evil is awesome , keep it going and you”l have my veiwership .

Very much enjoyed season 1 and am quite happy they renewed for a second season – I really need to know what happened in the finale!

My hubby and I can’t wait for the next season. What a good mixture of science and unexplained happenings at work! Don’t see where the new date is set. Says October, it’s now December. Did we miss something?

Please let there be a Season 2! I binge-watched it and was hooked from the very first episode. It’s new, fresh, and full of potential. One of my favorites since Supernatutal.

I bing watched it on Netflix & I absolutely love this show! I was disappointed when I first heard it was canceled but now that it’s getting a second season, I CANNOT WAIT FOR IT!

I love this show, I’m glad there will be a 2nd season!