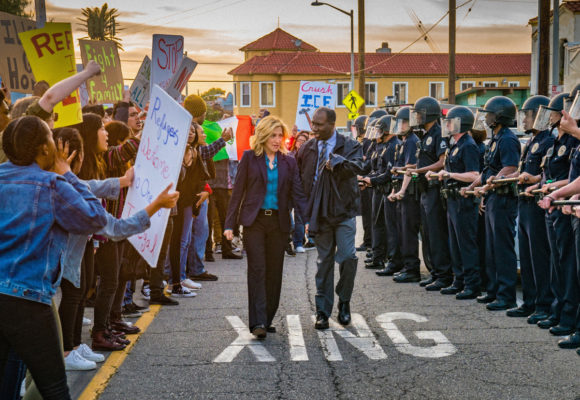 Tommy steps into her new job surrounded by her predecessor’s staff. Chief of Staff Donn Cooper (Jones) is a savvy cop with good instincts and the ability to be discreet. A polished and confident press secretary, Blake Sullivan (Clemens) is eager to earn Tommy’s trust. Ken Rosey (Chernus) is an idealistic speechwriter and former attorney.

Responsible for hiring Tommy, Mayor Buddy Gray (Sadoski) is a charismatic politician whose goals and ambitions don’t always align with Tommy’s. Buddy relies on the political instincts of his deputy mayor, Doug Dudik (Taylor), a slick operative with questionable morals who is wary of Tommy’s growing influence.

Now that Tommy is in Los Angeles, she has a second chance at a relationship with her adult daughter, Kate Jones (Philip). Kate still faults her mother for choosing career over family years ago.

Tough and sarcastic while remaining likable, Tommy has the conviction needed to succeed as the first woman to lead the LAPD in its fight to keep citizens safe and crime at bay in the City of Angels.

Series Finale:
Episode #12 — Cause of Death
Tommy and her inner circle fight back against an LAPD and city government conspiracy to have her removed as police chief.
First aired: May 7, 2020.

What do you think? Do you like the Tommy TV show? Do you think it should have been cancelled or renewed for a second season?

I was looking forward to season 2 of Tommy. Loved the show. I am so disappointed.

We just got Tommy in Australia, what a shame it was cancelled, i absolutely love the show.. What a shame, lets hope another channel picks it up.. Great show

was a great show should have been renewed

No it should have not been cancelled!!!!

Surprised and disappointed to see this is being cancelled …. Felt it was more enjoyable every week as characters continued to develop.

Tommy was a great show and if given the chance would have gotten the numbers to prove it. Three months was not enough time for people to even know it was on tv.

Couldn’t agree with you more Henry. Tommy and broke are awesome. You’re correct T. V. Doesn’t give shows more of a chance. People are too impatient.

Tony. I couldn’t agree more with you. They should give Tommy and broke a second chance and renew them.

This is horrible, it’s so hard to find anything to watch these days and when I do.
Why even put it out if they can’t see past season one

please dont cancel. We dvr most of our shows, and watch this one first. Great show.

I loved the show and hope it can continue.