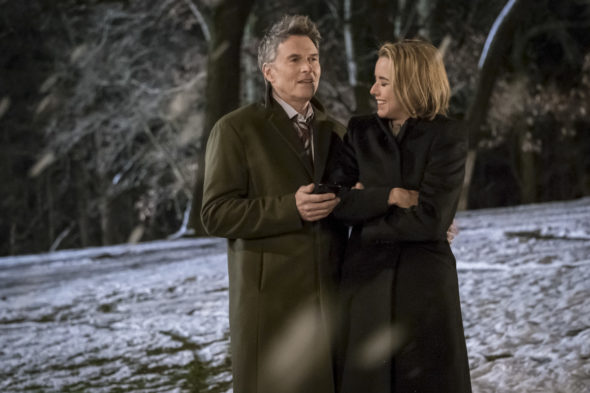 WE tv revealed more about the arrival of the CBS drama on their network in a press release. Check that out below.

The political drama explores Secretary Elizabeth McCord’s (Tea Leoni) life as the determined United States Secretary of State. As Secretary of State, McCord drives international diplomacy, battles office politics and circumvents protocol as she negotiates global and domestic issues, both at the White House and at home. A college professor and a brilliant former CIA analyst who left for ethical reasons, Elizabeth returned to public life at the request of President Conrad Dalton (Keith Carradine), who values McCord’s apolitical leanings, deep knowledge of the Middle East, flair for languages and ability to not just think outside the box, but to not even acknowledge there is a box. McCord’s team includes chief of staff Nadine Tolliver (Bebe Neuwirth); policy advisor Jay Whitman (Sebastian Arcelus); speechwriter Matt Mahoney (Geoffrey Arend); press coordinator Daisy Grant (Patina Miller); and charming assistant Blake Moran (Erich Bergen). As McCord debates third world problems, finesses foreign dignitaries at work and does battle with the president’s combative chief of staff, Russell Jackson (Zeljko Ivanek) that’s just a warm-up for when she goes home to her supportive husband, theology professor turned intelligence operative Henry (Tim Daly), and their three children, where ‘politics’ and ‘compromise’ take on a new meaning.

Are you a fan of Madam Secretary? Will you watch episodes on WE tv? Tell us what you think.

I was really surprised to find out that this show was very highly rated because it is in my ‘book’! And to get real Secretaries of State – WOW! It bookmarks my week, week to week. I miss it and worry about it if it’s not on any week. Always fascinating and fun to watch!!!

WE tv advertises “Madam Secretary” will show on Wednsdays all day .. This is a lie .. it did happen for about three weeks and then stopped…..

Love this show watched or recorded faithfully Have really missed it on Sunday nights.
Can you tell me what station WE might be on DISH?

Madam Secretary is one of my favorite shows of the week. I am always looking forward to the new shows. It is one of the three shows I watch each week but I look forward to.

I do watch it on CBS and look forward to the next new episodes. Unless I am mistaken it is not in danger of being canceled, is it?

worthymagic
Reply to  hooked on TV

Its live ratings STINK, but I believe CBS sold it into syndication. As long as it isn’t too expensive, it should be back.

Please renewed it and need rerun catch up in the middle season 4 more of it making hit I love it.

Glad to here Madam Secretary is returning! I enjoy this series for all the right reasons and coming from me, it says a lot …!

I adore Madam Secretary. Is CBS cancelling it? How awful!!!!!
It is the best feel good show ever made!
makes me SAD.
Some of the other shows on
cbs are so dumb. they need to go first

Don’t think I can get WE TV, which means I miss out on my favourite viewing, We got it on sky living, does this mean it’s finished on that Chanel.?

I like Madam Secretary and watch it every Sunday on over the air free TV buts since I receive over the air only and am not rich enough to pay for TV, I am unable to watch WE TV! I would watch if it was transmitted to my antennas!

Make people catch up need another season so good I love it never miss any episodes.

YES ! It is FINALLY COMMING BACK!, I have been waiting to hear when.

I didn’t know it was gone. I am still watching new episodes on over the air TV.

I really like Madame Secretary and watch it weekly. I will be sad to see it go, but CBS kills every good show too soon. I doubt I will watch it on WE TV, but it could be worse
It could have been picked up by Lifetime.

I didn’t know it was gone. I am still watching new episodes on over the air TV.