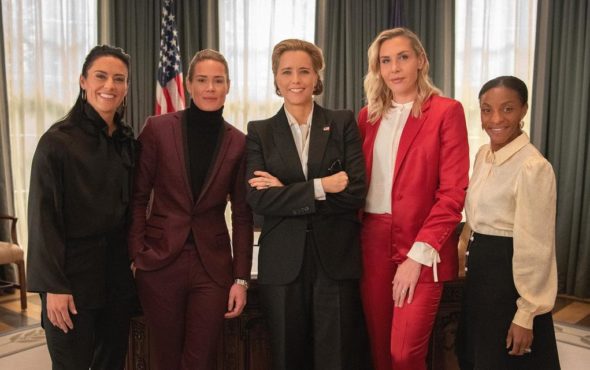 Madam Secretary is getting ready for its final bow. The finale for the drama is scheduled to air next month, and the finale will feature some very special guests. The episode is titled “Leaving the Station.” The cast of the series features Téa Leoni, Tim Daly, Željko Ivanek, Patina Miller, Erich Bergen, Wallis Currie-Wood and Kevin Rahm.

CBS revealed those guests in a press release. Check that out below.

“The series finale of MADAM SECRETARY will feature a host of esteemed guest stars who will help celebrate the critically acclaimed series’ six-year run. The episode will air Sunday, Dec. 8 (10:30-11:30 PM, ET/10:00-11:00 PM, PT) on the CBS Television Network.

What do you think? Are you a fan of Madam Secretary? Are you sad to see the series end?

please please please please renew this wonderful show. I run home every sun night to see this well written show. Please renew. It teaches me the deepest side about politics. It just goes 2 show that H Clinton wud have made a great President. Tea is the perfect choice 4 this role she’s great. Please give her back to us and thank u miss Te

I sure hate this show isn’t coming back on. I loved watching it. Always looked forward to the upcoming week.

I love the show, I love Tea Leoni and I’m very sorry to see it end. Good Luck to all the cast. I hope I will see them all in new projects soon!

so sorry to have this show end I loved the actors and would like to see it brought back.

So sorry to see the show end. I wish they would pick it up for another season

This is a fantastic show, or should I say ‘was’. I looked forward to new episodes each week. The characters of the show are wonderful from Elizabeth McCord, to her staff and also her family. I do not understand why this show would be canceled. I can see endless story lines with Elizabeth now president. This makes me sad that dramas such as this are dwindling from network television and reality shows are increasing! Makes me very sad!

I love the show. I’m sorry to see it end. I like that it takes on the issues of the day. Glad to have a woman president. Enjoy the family interaction as well.

Such potential now squandered by CBS. Some of the show’s personal intrigue a little hokey, but the general political/social/ethical issues have been timely and well-handled. THIS kind of TV drama easily bests most other shows. Maybe some other network will have the courage to continue the McCord journey.

Read:: Critically acclaimed show.
So why is it being canceled?
The show is in tune with todays events.

I loved every minute of this show!

Why is CBS taking such a great show off the air? First they moved the time so late, I had to watch the reruns as I have to get up early for work. Then some airhead cancels it? Are you people for real? Not the CBS I used to know.