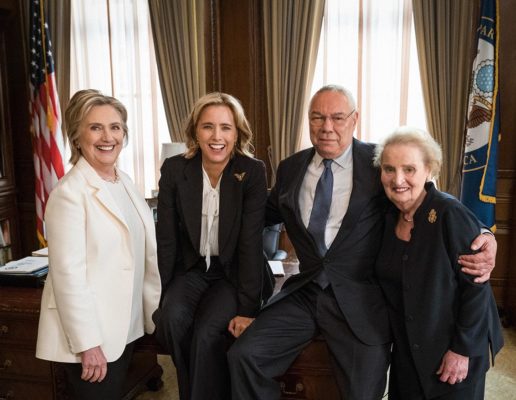 All three former secretaries of state will appear in the season five premiere of Madam Secretary, which airs on CBS on October 7th at 10 p.m. ET/PT.

CBS announced today that former secretaries of state Madeleine Albright, Hillary Clinton and General Colin Powell will guest star in the fifth season premiere of MADAM SECRETARY to be broadcast Sunday, Oct. 7 (10:00-11:00 PM, ET/PT) on the CBS Television Network. They filmed their scenes on Wednesday, July 11, during the first week of production of the critically acclaimed series’ upcoming season.

In the episode, Secretary of State Elizabeth McCord, played by Téa Leoni, turns to the former secretaries of state to ask their advice on how to respond to a delicate situation.

“We’re delighted to have these three former secretaries of state be part of our season premiere,” said Barbara Hall, Executive Producer and Series Creator. “It was a privilege to experience their perspectives and discourse both in and behind the scenes.”

“Having three powerhouses of diplomacy agree to come on our show is awe-inspiring and humbling. And that we were able to find a time in their busy schedules when they were all available is a miracle,” said Lori McCreary, Executive Producer. “We welcome Secretary Albright, Secretary Clinton and General Powell to the MADAM SECRETARY family!”

What do you think? Do you watch Madam Secretary? Are you excited for season five?

I love the show and will always watch it regardless of who guest stars. Seriously, who cares if Hillary Clinton is starred in an episode – I didn’t vote for her either but this is just a TV show. What I think makes the show seem like real life is the way Elizabeth acts when she’s at home. She does normal everyday things that we all do when we’re at home (not in front of a camera) e.g. her ugly converse slippers (she even took them on a weekend trip), the same slouchy bathrobe to name a few. Also the… Read more »

A wonderful show. Having the former Secretaries on was a truly great move. My wife and i always watch

I always enjoyed the program until you put Clinton on the show.
Come on that was so wrong!!! Can’t we just enjoy a program without having Clintons or you pushing the democrat party on your viewers
Thanks

I absolutely LOVE Madame Secretary. Tia Leone is terrific as well as the entire cast.

I LOVE THIS SHOW! IT’S INTELLIGENT, VERY WELL ACTED AND ONE OF A VERY FEW PROGRAMS I ACTUALLY LOOK FORWARD TO SEEING. AMAZING!!!!

One of the best shows ever made, full stop.

It can do no wrong and is always scintillating watching.

This show is great and my family and coworkers enjoy it .

I enjoy the show is more real that alot of tv shows that are on now. This show is also a great tool to teach and show how the government works . Please keep it going my family talks about it and my coworkers also .

We have been watching since the beginning. But, we will NOT watch the Oct 7th episode. It’s a sham to have Hillary appear!
And, if it becomes another program that heavily promotes the liberal agenda, we’ll cease to watch all together.

I am thrilled that my favorite show is continuing. It amazed me and sickened me to think that
this timely and brilliantly acted and written show was even considered being taken off the air. Tia Leone is a jewel…the show is so believable. Keep it on even if you have to eventually re name it as, Madame President!

I love this show….. I want it to go on at least 5 more season. She needs to become President

With Hillary Clinton appearing on there, NO I will not watch it. Her appearing certainly will not help the ratings. Stupid move.

I never comment on tv shows but I honestly love this show so much. The humanity, wit, intelligence, the broadening of my understanding of the vital importance of the work of diplomacy and the State Dept’s contribution to the nation and the world’s well being has been extraordinary to experience. I think this (and Christine Baranski’s Good Fight) are the only reasons to watch TV. Congratulations on setting a high bar for great television.

I’m looking forward to the fifth season of Madam Secretary with great anticipation. It’s an insightful, touching and very well-acted show, with great scripts and characters.