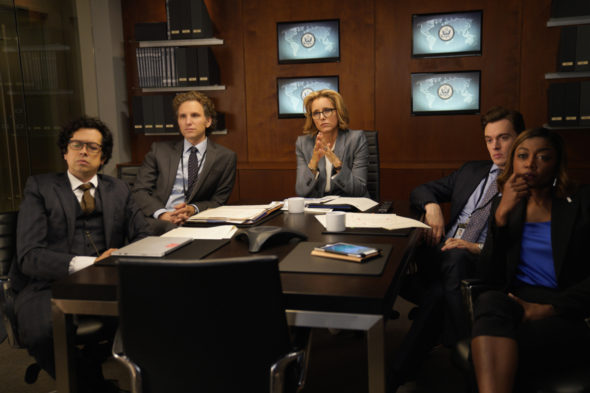 Is Elizabeth McCord getting the job done during the fifth season of the Madam Secretary TV show on CBS? As we all know, the Nielsen ratings typically play a big role in determining whether a TV show like Madam Secretary is cancelled or renewed for season six. Unfortunately, most of us do not live in Nielsen households. Because many viewers feel frustration when their viewing habits and opinions aren’t considered, we’d like to offer you the chance to rate all the Madam Secretary season five episodes here. *Status update below.

What do you think? Which season five episodes of the Madam Secretary TV series do you rate as wonderful, terrible, or somewhere between? Should CBS cancel or renew Madam Secretary for a sixth season? Don’t forget to vote, and share your thoughts, below.

*5/9/19 update: CBS has renewed Madam Secretary for a sixth season.

Please keep this tv show on, there are not
many shows without bad words, so is so
Good to see this show. Is a returning to
Civility.

This is another show I look forward to. Good storyline, good acting and something I would let teenagers watch as if I could stop them. I hope they don’t replace it with another crying dating show or another reality show pitting a bunch of losers against each other.

Madam Secretary is one of the finest shows on TV, to cancel it would be a TRAGEDY!!!

Watched it early on but got tired of the messagey story lines. No longer watch.

This is an insufferably boring show that is tailored to the left-leaning and liberal people of America. There is a definite, liberal undertone in this program that I find completely boring. It has had its day: Put it out of its misery, and relieve us of this monotonous tripe!

Please Do NOT cancel Madam Secretary. We look forward to this show with enthusiastic impatience each week. Great cast and shows.

This is one of the best shows on TV
Please renew

Please renew Madam Secretary for season six. I have binge watched this show so many times I remember every word of each episode. Love it!!! I can’t wait for Madam Secretary to turn into Madam President!!!

Madam Secretary is my favorite show. I love the characters and I’m on pins & needles waiting to hear if it’s renewed or cancelled.

Madam Secretary is well written, well acted and wonderfully up to date with current world and political issues. Finally a show on TV that is worth watching. A breath of fresh air compared to the mindless drivel of many programs the networks continue to provide. Here’s hoping for many more seasons!