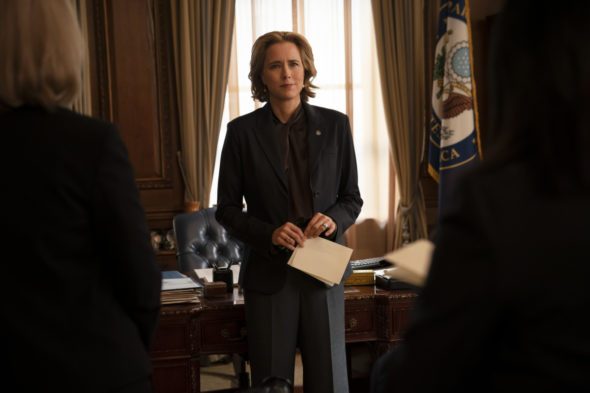 What can fans expect from the final season of Madam Secretary? Recently, executive producers Barbara Hall and Lori McCreary spoke with TVLine about the CBS TV show’s sixth and final season.

In the interview, Hall and McCreary revealed the sixth and final season of Madam Secretary will jump ahead to see Elizabeth become president:

We found a way to have the best of both worlds, where we decided to jump ahead and make her president … And we get the fun of picking and choosing the moments that we go back to, so that we don’t have to take even four or five episodes to do a whole campaign.”

The decision I had to make was, what characters need to be most prominent in [Elizabeth’s] new division and her world? It’s such a different world that some of the other [characters’] jobs were not translated into what we wanted for her, and the kids aren’t really at home anymore.”

Absolutely LOVE, LOVE “Madame Secretary”. I’m just crushed that the 6th season was the final season so since I had seen episodes from Oct. 6th I suppose it is done. Will there been any other shows similar? I mean it does give you insight into the political government, similar to the West Wing which I loved too! I loved the complex aspects of the show.

I couldn’t find out on the internet: Did the great actor playing Daisy want off the show a little early?

I have loved “Madame Secretary” since the first episode and will miss it very much! The casting, writing, & government/political education are superb. The ethics & topical discussions (even global warming & Congressional subpoenas, hooray!) have been so timely. I hope CBS changes their minds — unless Tea Leoni wants out!

Yes I’ve been watching since the beginning! I love the show ! The honesty and integrity you have in the show is wonderful. I hope to see more of this.

Love it to fade away with her still being president with Henry at her side. Would love it if we had another season.

I love this program and have watched every episode. Madam Secretary needs to become Madam President and if it has to end, then it needs to go out in an array of fireworks. The new VP needs to be Mrs Obama, no long drawn out campaign, lots of firsts like first Chief Justice being a woman, Puerto Rico is restored, all 50 states won by Tia Leoni in her victory as President, wins 95% of Electoral College, children all end up getting married, cameo by President Obama, her inauguration has all the top music stars that sing her favorite music… Read more »

I was so happy to read James E. Allen’s comments. I could not agree more. To see the problems that Madam President is expected to solve starting with immigration and getting involved in global warming. Definitely will welcome Mr. & Mrs. Obama in cameo appearances and full involvement in strengthening relations with allies as well as our Latin America neighbors. Let the first woman president go out in a cloud of glory . . . . . and, needless to say, I am very curious on the role the First Husband is going to play.

I had the same thought — thinking back to other great shows I loved that got canceled way too soon.

Madame Secretary needs to be elected President and Mrs Obama needs to be her VP. I like the idea going right to her victory w/out a drawn out election process. Solve the immigration problem, create some firsts–beside the first woman president–first woman VP, first woman Chief Justice, President Obama cameo, I’m sure you have the idea. I just want Madame Secretary to go out in first place. It takes spectacular firsts to draw the audience.

My wife and I really like Madam Secretary we watch it every week and enjoy it very much!!! Please do not take it off the air. There are not a whole lot of decent shows on now days.

I love the show and have watched from the very first episode. There are many educational and thought provoking issues, that shed light on our current political life. I am extremely disappointed that the show is ending, but a new show “Madam President” would be so wonderful, and embraced by all who have faithfully followed Madam Secretary. Please con sider.

I’ve been captivated by what & how a secretary of state does the job and with good reason inferred that Hillary Clinton thought it was realistic. However, if we can’t have it, I’d settle for “Madame President.” Season 6 has been great, too.

I absolutely love the Madam Secretary series. I missed the first couple seasons and bought the DVDs. I also watch the show on the weekend late night CBS . Tia Leoni is a wonderful actress along with Tim Daly. I hope they are together in another drama series.

Love the show and am really glad it was not abruptly cancelled and that some/many of the storylines will be resolved.

I love this program it’s written well and I’m going to miss the interaction with the anachronistic son and the rest of the family. You now need a Madam President