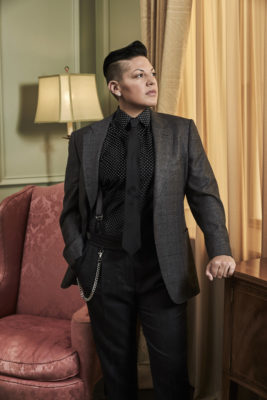 On the political drama, Ramirez will be playing “Kat Sandoval, a brilliant political strategist, legendary in D.C. for her talent and for abruptly dropping out of politics until Elizabeth manages to coax her back into the State Department.” She joins fellow cast members Téa Leoni, Tim Daly, Bebe Neuwirth, Željko Ivanek, and Keith Carradine.

Ramirez makes her debut on Madam Secretary on November 19th at 10 p.m. ET/PT.

Ramirez will play Kat Sandoval, a brilliant political strategist, legendary in D.C. for her talent and for abruptly dropping out of politics until Elizabeth manages to coax her back into the State Department.

“We’re very excited that Sara is joining the cast,” said Barbara Hall, Executive Producer and Series Creator. “She brings a fresh perspective and a fun, energetic quality to the State Department staff.”

“We are thrilled to have Sara join the MADAM SECRETARY State Department team,” said Lori McCreary, Executive Producer. “From the moment she walked on set with her talent, intellect and spirit, she became part of the family!”

Tony Award winner Sara Ramirez appeared for over a decade as Dr. Callie Torres on the television drama “Grey’s Anatomy.” Also, she is the voice of Queen Miranda on the animated series “Sofia the First” and the voice of Mam� Calaca in “Vampirina.” Prior to “Grey’s Anatomy,” Ramirez performed on Broadway in Monty Python’s “Spamalot” as Lady of the Lake, for which she earned both a Tony Award for Best Performance by a Featured Actress in a Musical and an Outer Critics Award for Outstanding Featured Actress in a Musical. Recently, Ramirez co-hosted “Ted Talks Live NYC” on PBS. Also, she has executive produced three films: “Loserville,” “Out of Exile: Daniel’s Story,” the virtual reality film experience, and “The Death and Life of Marsha P. Johnson,” a documentary by David France about transgender LGBTQ civil rights pioneers Sylvia Rivera and Marsha P. Johnson that recently premiered on Netflix. Ramirez was honored in May 2017 by the city of Los Angeles as an activist and artist working to advance equality as part of Los Angeles Lesbian, Gay, Bisexual, and Transgender Heritage Month. In 2015 Ramirez was awarded the Ally for Equality Award by the Human Rights Campaign Foundation. In November 2017, she will be awarded the Trailblazer award by the LGBT Center of New York City.

What do you think? Do you watch Madam Secretary? Are you enjoying season four so far?

I love this show and have been watching from the beginning. I love the endless story lines that go right along with real life and I love that she is handling them well. I do hate it when people pass judgement on the show before watching it and I know the time slot this show is stuck in has affected its ratings. But please don’t cancel it because, other than Survivor, there is nothing else to watch on regular TV now!

Love this show! Football games delay airing until after 11 sometimes. Kills ratings. Move it where it can get a better chance. It is deserving of fair chance. Better than so much junk on the air now.

This show and its placement is one reason On Demand must have been created. Please renew for at least another season. Looking forward to many more episodes of great writing and talented cast although missing Bebe Neuwirth. Welcome to Sara Ramirez.

Yes. I absolutely watch Madam Secretary. It is one of the best political dramas ever. All the actors are FANTASTIC. Please keep it going.

This is a wonderful show. Smart & witty. I’m sorry Bebe N. is leaving the show but look forward to the new addition. Please don’t cancel this show!

I love this show but am not pleased with it’s position on the channel. Waiting for the “games” to end and then on into the night does not enhance it’s popularity.
Another night????