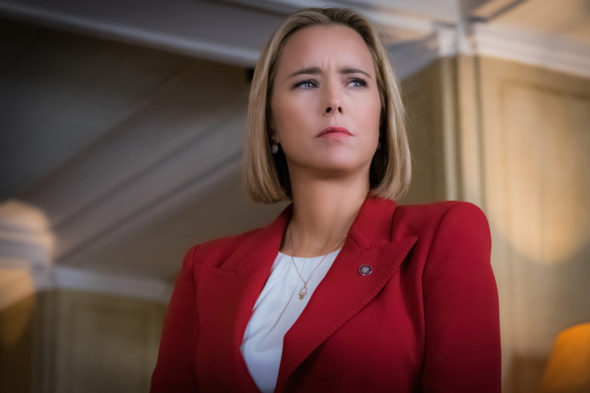 How long will Elizabeth McCord remain Secretary of State? Has the Madam Secretary TV show been cancelled or renewed for a fifth season on CBS? The television vulture is watching all the latest TV cancellation and renewal news, so this page is the place to track the status of Madam Secretary, season five. Bookmark it, or subscribe for the latest updates. Remember, the television vulture is watching your shows. Are you?

The fourth season of Madam Secretary averaged a 0.63 rating in the 18-49 demographic and 6.16 million viewers. Compared to season three, that’s down by 28% and down by 26%, respectively. Find out how Madam Secretary stacks up against the other CBS TV shows.

Will CBS cancel or renew Madam Secretary for season five? In the 2016-17 television season, this show’s demo ratings ranked 20th out of 26 scripted CBS series, but it drew enough viewers to rank eighth in terms of audience size. This installment will give it a decent sized syndication package, so a cancellation is somewhere between possible and likely. For now, I’ll keep an eye on the ratings and update this page from time to time. Subscribe for free updates on any Madam Secretary cancellation or renewal news.
4/18/18 update: CBS has renewed Madam Secretary for a fifth season for 2018-19. Details here.


What do you think? Are you glad that the Madam Secretary TV show has been renewed for a fifth season? How would you feel if CBS had cancelled this TV series, instead?

I love madame secretary. Hope it is renewed .

I would hate to hear this show to end cause I watch it all the time. I love madam Secretary cause I love the actors on there. Please keep it on.

I love Madam Secretary. I’m a Netflix watcher. I think more people would watch if you guys didn’t take so much time off between seasons without telling viewers what’s going on. Please let us know when the seasons are coming back on. It’s a great show and I’m a fan. But thought it went off the air and stopped looking for it. But I watched the whole four season again so that should say something. Please don’t cancel. Advertise. Jen