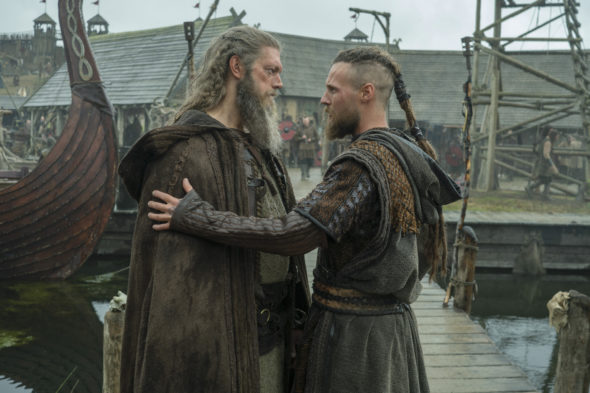 Get ready for even more from the world of the Vikings. A sequel series to Vikings is now in the works, and it will take viewers to the time of Leif Erikson, Freydis, Harald Harada and the Norman King William the Conqueror. The new series is set 100 years after the end of the History drama. The final season of Vikings premieres on December 4. Michael Hirst is behind this new series.

Netflix shared quotes from those involved with Vikings: Valhalla in a press release. Check those out below.

“I am beyond excited that we are announcing the continuation of our Vikings saga. I know that the millions of our fans across the globe will be thrilled by the belief being shown in our show by MGM and Netflix. Jeb Stuart, a truly wonderful writer, will bring new story-lines and a powerful visceral vision to stories about some of the most famous Vikings known to history.”

“We are thrilled to be partnering with Michael, Morgan, Jeb and Netflix on the next chapter in the incredible Vikings universe. Valhalla has been a labor of love for everyone involved and as we look ahead to the continuation of this great saga, we are excited to know that fans the world over will have the opportunity to continue with the series on its new home at Netflix.”

“Vikings: Valhalla promises to be everything that fans love about the franchise: heart-pounding, unstoppable action rooted in rich characters and dramatic storytelling that shines the light on family, loyalty and power. We are thrilled to bring the next iteration of the Vikings saga to life with Michael Hirst, Jeb Stuart, Morgan O’Sullivan and MGM Television.”

A premiere date for Vikings: Valhalla was not revealed.

What do you think? Will you watch the new series when it arrives on Netflix? Are you a fan of the original Vikings?

I will definitely be watching.

Can not wait!!! Sometimes it just takes way to long from announcements to actual show time. The ANXIETY it creates just waiting for the release kills me.

Most definitely be watching

Most definitely I will watch. LOVE this show so much. I was sad when they said it was ending. So excited fir more great stories & characters. Can’t wait

Why not carry on the vikings, the new show could have carried on where the old left off. I will still watch out for the new show though, when will it be out?

I dont understand why the new show has to start 100 years in the future,sort of no different than just canceling my favorite series

I just found this series and have fallen in love with all the characters would be very happy to have it continue.

I truly enjoyed the Vikings and hate to see it end. I was hoping the 3 brothers left would meet again. It looked to me like Bjorne’s wife survived as she dove into water, we know the brother and his tough wife in Iceland survived… was hoping those 3 would take off against the Rus and other 2 brothers! Anyway, yes I will watch Valhalla!!

I will definitely be waiting for this!

Yes! Will watch and look forward to the sequel as I loved the Viking series

I have enjoyed the Seasons of Vikings with much anticipation waiting for the outcome. I hopeful that it continues.