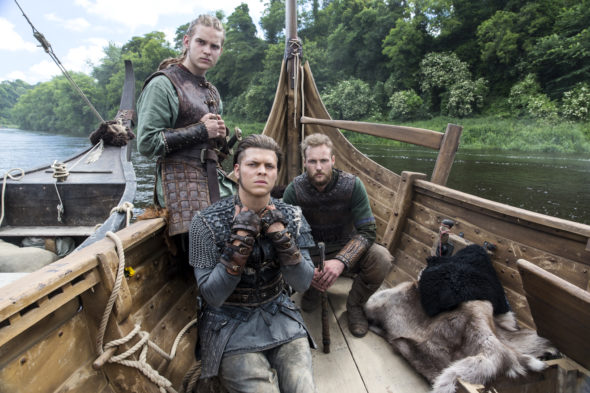 Fans don’t have to worry that the Vikings TV show on History will be cancelled in the near future. The fifth season just kicked off last week, and back in September, History renewed Vikings for season six. Still, how long should the audience expect this historical drama to run? According to History’s new programming Executive Vice President, Eli Lehrer, it sounds like the decision to continue or end Vikings largely lies with creator and writer Michael Hirst.

What Does the Future Hold for the Vikings TV Show on History?

Now that A+E Networks has positioned its A&E cable channel as a strictly unscripted concern, History has become the parent company’s home for scripted fare. In light of that, Lehrer talked to Deadline about a potential Vikings spin-off and also discussed the future of Vikings on History. Check it out.

DEADLINE: With Vikings on the air for so long, you must be thinking about potential spin-offs or companion series since it’s such a vast world. At one point, the Vikings story will end, and it’s a good idea to create a franchise.

LEHRER: I think Michael Hirst is so busy writing the episodes that we’ve ordered that I can’t imagine he’s had time to think about spinning it off. So the answer is, at this point, we haven’t had conversations about anything beyond how can we get more episodes of Vikings itself. (Series creator Hirst writes every episode of Vikings, which has been producing 20 episodes a season in its most recent Seasons 4 and 5.) It’s a monumental undertaking but he does it with a shocking degree of ease and equanimity.

DEADLINE: Have you thought about an end game or date for the show?

What do you think? Do you still like the Vikings TV series? How many seasons, in total, should it run on History? Let us know, below.

Love it keep them coming

Finish it while you can instead of keep it longer.

I’m hoping that there is going to be more to the story line than pure raping and pillaging. More history and less violence (although I recognize that there must be some – they are Vikings, after all!) . Am loving the adventures of Floki.

Would like to see the series run another year or two…It’s that good.