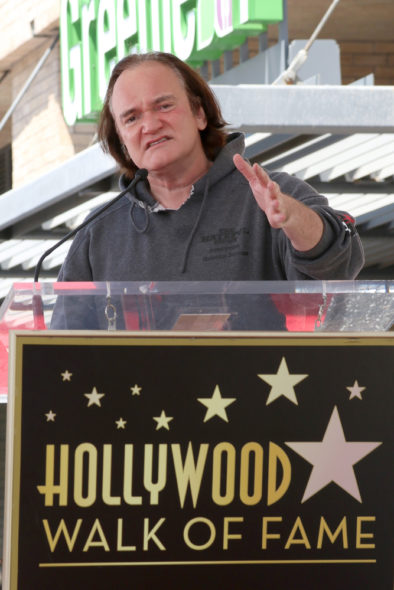 It seems filmmaker Quentin Tarantino, known for his own, original movies, can resist the siren song of the final frontier. Reportedly, he’s pitched an idea for a new Star Trek feature to producer J.J. Abrams (who’s working on the next Star Wars).

Apparently, Abrams is ready to set up a Star Trek writers room for the project and see where it (boldly) goes. If it takes off, Tarantino may direct the film.
Deadline reports:

Already busy prepping to direct the film he just set up at Sony Pictures, Quentin Tarantino is also planning to boldly go where he has not gone before. Sources said that Tarantino has come up with a great idea for a Star Trek movie at Paramount. After sharing his idea with JJ Abrams (who himself is busy prepping Star Wars Episode IX), I’ve heard the plan is to assemble a writers room of scribes who’ll hear Tarantino’s take and begin to put together a movie. If it all works out, Tarantino might direct it, with Abrams producing.

While Tarantino has always come up with his own original films, many have wondered what he might do if he took the reins of an existing franchise. He has only done that on television, twice directing episodes of CSI and once an episode of ER. He has spoken about the appeal of taking on one of the James Bond movies, but the hard part of something like that is getting the rights holders to give him a wide creative swath that comes along with a final cut auteur like Tarantino. This would give a remarkable boost to the venerable franchise for Paramount, which is looking to build them under studio chief Jim Gianopulos.

What do you think? Do you trust the Star Trek franchise in Tarantino’s hands? What kind of concept do you think he’ll come up with?

Quentin Tarantino is the Man to Direct the next “Star Trek” movie but please J.J. Abrams be Executive Producer with Quentin Tarantino as an Executive Producer as well and again please have it come out in Theaters before/by 2020 also so far the new “Star Trek” movies plus the old ones are still equally awesome excellent great super fantastic very cool!