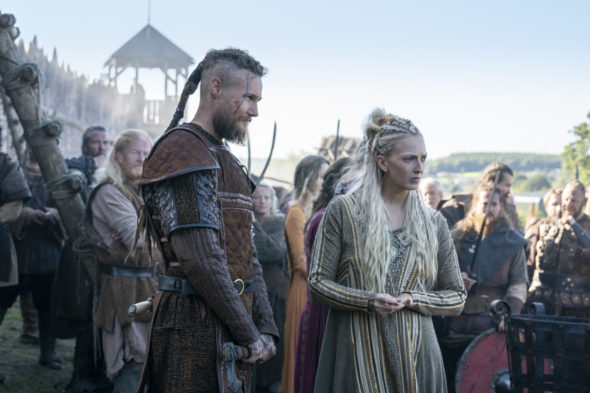 Vikings: Valhalla now has its cast. Netflix has announced the cast and the characters they will play in the new Vikings spin-off series, which is a sequel to the recently wrapped Vikings series. That drama wrapped on Amazon at the end of December and the final episodes will air on History Channel (where all of the previous episodes had been aired) at some point in 2021.

Netflix revealed more details about the cast of Vikings: Valhalla in a press release.

The all-new VIKINGS: VALHALLA begins in the early 11th century and chronicles the legendary adventures of some of the most famous Vikings who ever lived – Leif Eriksson, Freydis Eriksdotter, Harald Hardrada and the Norman King William the Conqueror. These men and women will blaze a path as they fight for survival in the ever changing and evolving world.

Character descriptions are below:

SAM CORLETT as LEIF ERIKSSON
A Greenlander, raised on the outer fringes of the known world, Leif comes from a tightly-knit family steeped in the old pagan beliefs. An intrepid sailor and physically tough, Leif is our entry into a Viking world in the throes of violent change.

FRIDA GUSTAVSSON as FREYDIS ERIKSDOTTER
Fiercely pagan, fiery and headstrong, Freydis is a staunch believer in the “old gods.” Like her brother, Leif, she reaches Kattegat as an outsider but becomes an inspiration to those of the old ways.

LEO SUTER is HARALD SIGURDSSON
Born into Viking nobility, Harald is one of the last Viking berserkers. Charismatic, ambitious and handsome, he is able to unite both followers of Odin and Christians.

BRADLEY FREEGARD is KING CANUTE
The King of Denmark. A wise, savvy and ruthless Viking leader. Keeps his friends close and enemies closer. His ambitions will mold the course of history in the 11th century and make him a defining figure of the Viking age.

JÓHANNES JÓHANNESSON is OLAF HARALDSON
Olaf is Harald’s older half-brother. He is physically huge and ambitious; he is a stern and unforgiving Viking. Olaf is an “Old Testament” Christian.

LAURA BERLIN is EMMA OF NORMANDY
The young, ambitious Emma of Normandy is from the Norman court and of Viking blood. Politically astute, and one of the wealthiest women in Europe.

DAVID OAKES is EARL GODWIN
The ultimate survivor. Chief counsellor to the King of England. Born on the political fringes, his cunning ways get him far.

CAROLINE HENDERSON is JARL HAAKON
A great warrior and tolerant leader, Haakon rules Kattegat with a steady hand. Though Pagan, she has managed to keep Kattegat a city open to all faiths in a challenging time. She will become a powerful mentor to Freydis, who is drawn to her wisdom.

POLLYANNA McINTOSH as QUEEN ÆLFGIFU
Calculating and ambitious, Queen Ælfgifu of Denmark has a hand to play in the political power struggles unfolding in Northern Europe. She uses her charm and guile to great effect as she promotes the interests of her Mercian homeland and tries to assert herself in Canute’s growing power structure.

Check out the casting announcement below.

What do you think? Are you a fan of Vikings? Do you plan to watch the Vikings: Valhalla TV show on Netflix when it arrives?

I will watch the series but feel the series would be more interesting if it more closely followed the timeline of Vikings. By the time of William the Conqueror the Viking holdings in England were in decline, not in the ascendancy as they were at the time of the invasion by The Great Pagan Army.