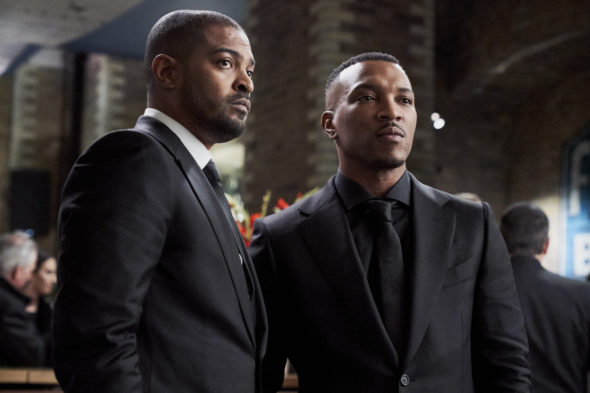 Is The CW’s audience interested in a British crime drama? Has the Bulletproof TV show been cancelled or renewed for a third season on The CW and Sky TV? The television vulture is watching all the latest cancellation and renewal news, so this page is the place to track the status of Bulletproof, season three. Bookmark it, or subscribe for the latest updates. Remember, the television vulture is watching your shows. Are you?

Airing on The CW television network in the United States, Bulletproof stars Ashley Walters, Noel Clarke, Lindsey Coulson, Jason Maza, David Elliot, Olivia Chenery, Lucie Shorthouse, Lee Ross, Vanessa Vanderpuye, and Jodie Campbell. Unfolding in London, the series centers on Aaron “Bish” Bishop (Clarke) and Ronald “Ronnie” Pike Jr (Walters) who work as undercover police detectives. Although they are from vastly different backgrounds, these partners have a deep, brotherly bond that finds its foundation in their moral code. In season two, Bishop and Pike find themselves in a tense, heart-stopping game of ‘cat and mouse’ with a notorious and elusive crime family, whose connections spread far beyond the borders of London and the UK. Their chase for justice takes them from the streets of London to Amsterdam and Cyprus, where they risk everything to succeed.

The second season of Bulletproof averaged a 0.07 rating in the 18-49 demographic and 348,000 viewers. Compared to season one, that’s down by 49% in the demo and down by 42% in viewership. Find out how Bulletproof stacks up against other The CW TV shows.

Will The CW cancel or renew Bulletproof for season three? The series doesn’t perform very well in the ratings but the network only licenses the series so it likely doesn’t cost them much to air. In August 2019, Sky TV in the U.K. (where the series originates) ordered a three-part special. I suspect that, despite the low ratings, The CW will air the special or a third season if/when Sky orders one. I’ll update this page with breaking developments. Subscribe for free alerts on Bulletproof cancellation or renewal news.

10/28/20 update: Bulletproof has been renewed for a third season.

What do you think? Are you glad that the Bulletproof TV show has been renewed for a third season? How would you feel if Sky TV and The CW had cancelled this TV series, instead?

Absolutely love Bulletproof, its brilliant, would be disappointed if the show got cancelled, good entertainment all round, needs to stay!

My partner and I enjoyed Bulletproof immensely. Can’t wait for next series. Would have been gutted if it had been cancelled

Gréât show!! Hopefully will have a long
“Life”!!

I love this show, action, comedy, good chemistry between the cast.
I would give it 9 out of 10 (always room for more surprises)