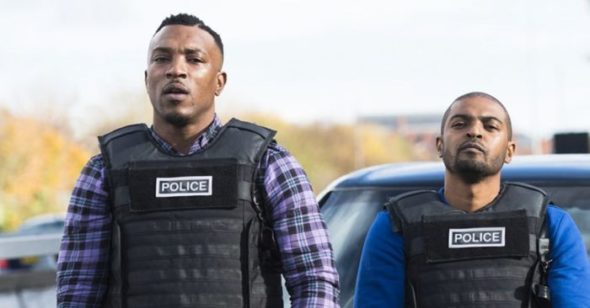 The CW is borrowing from across the pond. This week, the network announced they’ve picked up the UK TV show Bulletproof for summer 2019.

The drama, which airs on Sky in the UK, “follows two undercover cops, Bishop (Noel Clarke, “Star Trek: Into Darkness”) and Pike (Ashley Walters, “Top Boy”) as they chase down hardened criminals in London’s East End.”

Bulletproof is slated to debut on The CW in summer 2019.

October 9, 2018 (Burbank, CA) – Continuing to bulk up its slate of original summer programming, The CW Network has acquired the British action drama BULLETPROOF from Sky Vision and ordered second seasons of the legal drama BURDEN OF TRUTH, starring Kristin Kreuk, and the fantasy-adventure series THE OUTPOST; all are set to air in Summer 2019. The CW has also ordered new seasons of the hit magic series PENN & TELLER: FOOL US and MASTERS OF ILLUSION, and the classic improv comedy WHOSE LINE IS IT ANYWAY? for Summer 2019. Premiere dates and times will be announced later.

Adrenalin-fuelled and packed with compelling characters, BULLETPROOF follows two undercover cops, Bishop (Noel Clarke, “Star Trek: Into Darkness”) and Pike (Ashley Walters, “Top Boy”) as they chase down hardened criminals in London’s East End. But the series is more than high-octane action and thrilling cases. On the surface Bishop and Pike have a lot in common, they are cool, smart and unapologetically street-wise and tough. But even more, they share a deep, fraternal relationship and are always there for each other. However, they come from very different backgrounds and their personal motivations and emotional lives outside the police force differ as a result.

Pike is an aspirational family man, the son of a decorated police officer who is determined to follow in his father’s footsteps, but not be in his shadow. Meanwhile, Bishop grew up in care homes and on the streets, and never knew his father. Despite these differences Bishop and Pike are bonded by the same moral code and work brilliantly well together even when the chemistry between them looks set to explode. Full of grit and sometimes gloss, Bulletproof is stylish and funny with entertaining, riveting criminal cases in each episode. At its heart though it is a series about the fascinating relationships between fathers and sons, as well as between best friends.

What do you think? Are you a fan of cop dramas? Will you watch Bulletproof?

I love this show because they show two black leading actors in positive roles and not the stereotypical role of drugs and crime. This is Not the 1970’s!!! Black actors need to be front and center on shows

Love it i didn’t know CW pick it up. I’m watching it now please don’t cancel it no time soon. I’ve downloaded the Theme song a long time ago when I first saw the show.

I love Bulletproof so glad it came back for a second series watching it now downloaded the full second series to watch in a few nights love the guys,great partnership ,great cast and the writing is both entertaining ,whitty and also gritty I hope we see much more of them in the future there must be a lot more to write about after all ??well done we need more British drama !

Love this show it’s different than any show like it.

I love this show different than any other cop drama series.

I loved the show. This is the British version of Bad Boyz. I would like to see the show continued. Noel Clarke and Ashley Walters have great chemistry. I thought the show was nicely written.

OMG THIS SHOW IS AWESOME!!!!

Think of it as a Bad Boys style show with a British twist that also tries to incorporate an American style.

It’s a little over corny at times in terms of the emotional elements but the action is great and gritty.