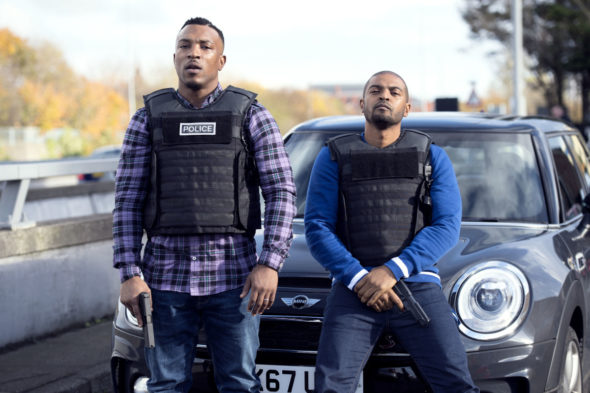 TV show description:
From Noel Clarke, Ashley Walters, and Nick Love, the Bulletproof TV show is an action-filled British crime comedy-drama. The series originally premiered in UK on Sky in 2018.

Unfolding in London’s East End, the story centers on Bishop (Clarke) and Pike (Walters) who work as undercover police. Although they are from vastly different backgrounds, these two cops have a deep bond which finds its foundation in their moral code.

Despite their differences, Bishop and Pike seem to have a lot in common. More like brothers than mere partners, the cool, street-smart partners always have each other’s back.

As the son of a decorated police officer, Pike lives to be a good family man and follow his father’s lead. Meanwhile, Bishop grew up in the foster care system, when he wasn’t on the streets. Although their backgrounds and motivations vary, they are both determined to do the job right.

Employing both humor and drama, the series uses the criminal cases to delve into the men’s bond, as well as the meaning of family and true friendship.

Series Finale:
Episode #17 — South Africa: Episode 3
Just when it looks like this case is all but solved, Bishop (Noel Clarke) tells Pike (Ashley Walters) and Tanner (Lindsey Coulson) about a hunch that turns everything on its side and puts Arjana’s (Vanessa Vanderpuye) life in jeopardy.
First aired: March 29, 2021.


What do you think? Do you like the Bulletproof TV series? Should this Sky and CW TV show have been cancelled or renewed for a fourth season?

Please don’t cancel it….we are waiting for season 4, 5, 6, 7. 8 as far as you can take us Pleeeeeeeaaasssseeeeee

Omg don’t cancel it. That is an awesome show.

I just loved the show, crime and comedy together please bring it back

I been looking for it. It need to be back on Wednesday nights. Please bring it back LOVE the action and their funny ways getting the crooks. BRING THEM BACK.
THEY ARE FINE MEN

I was switching channels and saw the show I LOVE IT. I told a few people and they started just when it ended. The show doesn’t get much advertising. Also, it came on same time as some other shows